In America live relatives of mine in Canada and in the United States.

Of the Canadians I have the information: Walter Kreddig , Mayerthorpe, Alberta, Box 147, Canada. The Kreddigs are relatives of the family of my mother, my great-grandmother was Anna Dorothea Mattern, née Kreddig, and one relative with the name Kreddig has visited us from Canada in Bad Salzdetfurth, shortly after the war, and my mother tried to organize a wife for him, but that did not work. My mother said sometimes that she always tries to pair off people, but that never works.

There her older sister Ida was much more successful. She met my future father on a railway trip, and in no time at all she had paired him off.

When I was in the twentieth, my mother gave a reminder, when I then in the end get married, and I told her then, something like that is more for people in the thirties. But that was a mistake, because when I was in the thirties she reminded me of that, disapprovingly, and then I did not repeat the mistake of that time, and referred to the fortieth, but told my mother, it is actually the task of the parents to organize a suitable wife. But there she immediately defended herself, and explained to me that she does not really get into contact with young people to have the opportunity to it.

In the family documentation is the following information about the neighbouring places of Kranthau:

The estate Neumannsruh, owner Kreddig, Arthur, was 600 acres in size.

The relatives in the USA are the Ruecks.

The genealogical table of the family Lemke, which then came together with the family Rueck, looks about like this:

Descendants of an individual are placed below and to the right of the name of the ancestorÆs name.

The genealogical table of the Americans in the USA, therefore of the family Rueck, looks about like this.

That was the genealogical table of the US-Americans, that were therefore relatives on the fatherÆs side.

From my mother I once got the following information: Emma Rick, South Byron, New York, USA.

That could be the Emma Rick from the above table. She was then probably in contact with my mother after the war.

My mother has also given me the following information, probably also of relatives, with whom she has corresponded: Schutt, Paul and Charles, 1058 Plank Road, Webster, New York, USA.

A third address from her was this: Mrs. D. Clark, 2788 Dewey Avenue, Rochester, New York, USA.

My father often mentioned Rochester and Buffalo. In that area in America he probably lived.

In our family album there was a picture of my father with his motor car, a Ford; was probably not much newer than the famous T-model, perhaps even a T-model. Then there was a photo, or picture postcard, of the Niagara Falls, which I then also visited, and a picture postcard of the Empire State Building, on which I also was. But I assume that my father has not been on that skyscraper, because that was at his time probably still under construction, and the picture postcard was therefore just a drawing and not a photo.

My sister Irene has also once lived one year in America. She was an exchange pupil in California and has made there final high school examination. That was 1952 when she went over and for preparations she received information about that country, also political information. These information brochures I have read. It was an election year and Eisenhower and Adlai Stevenson were the candidates. I thought that Eisenhower would win; I also preferred him. After that I have followed the elections there more or less. Four years after that there were again the same candidates. And eight years after that they were then Nixon and Kennedy. I thought Kennedy would win, but preferred Nixon. Since that wrong decision my interest in the election was no longer that great and also not in that country. It became the time of the low of the western world. At that time there were 4 countries which were divided, in a communist and a free part. That was Germany and Korea and China and Vietnam. Vietnam became then the first country which thanks to the politics of Kennedy and Johnson became reunited, and became therefore completely communistic, and this then also became the climax of the communist world conquest. These atheistic beliefs then spread more in the West under the so-called educated people and are today, thanks to people like Clinton and Obama, the predominant system of beliefs and become stronger and stronger.

When I was ready to go abroad, America was out. Had I arrived there, they would have told me, you love America, then go to Vietnam and fight for us. And then I would have witnessed how they helped, through their blindness, the dictatorship of communism to become victorious.

The family documentation says that the five children of Heinrich Rueck and his wife Anna emigrated to the USA in the year 1888. Then they obviously took on another spelling of their name and called themselves Rick.

The Heinrich Rueck was therefore the older brother of my great-grandmother Wilhelmine Lemke, née Rueck. The Ruecks came from Kr÷nau in the district of Preu▀isch Holland. The place Kr÷nau is close to the border with the district of Mohrungen and can be seen on the map Teil2. On the other side of the district border is Hagenau, the place where our trek stopped for the first time and stayed overnight.

The five Ruecks were therefore the cousins of the mother of my father and consequently my father had relatively close relatives in America and his mother had certainly known these five cousins well, because she was in the year 1888, the year they emigrated, 22 years old and was then still not married. And she lived in Koken, in the same district where also Kr÷nau was, and from where her mother came.

And so the connections of these two families, Lemke in Koken, and Rueck in Kr÷nau, were certainly quite close, and one saw each other often, at least at family matters.

The distance between Koken and Kr÷nau is 14 km as the crow flies and that was also then not far.

My father had probably a good idea of the 5 relatives in the USA through the accounts of his mother and consequently this connection resulted as starting-points for his stay in America.

When I visited the USA a man was president, whom Nixon had appointed to that position, and he was then the last who did not promote the spreading of atheism.

After the war we received CARE parcels and there the relatives in America played perhaps a part in it.

I remember well how after dinner all sat at the table and watched my sister Irene peeling an orange very carefully from a CARE parcel from America and then divide it into its segments and then hand them out.

My encyclopedia of 1989 says: CARE (Cooperative for American Relief to Everywhere, Inc.), a charity founded in 1945, initially for aid to Europe but now operating worldwide.

Now comes a map of North America. It shows the state Alberta in Canada and also the state New York in the USA. The place Webster, where the Schutts live, is marked. 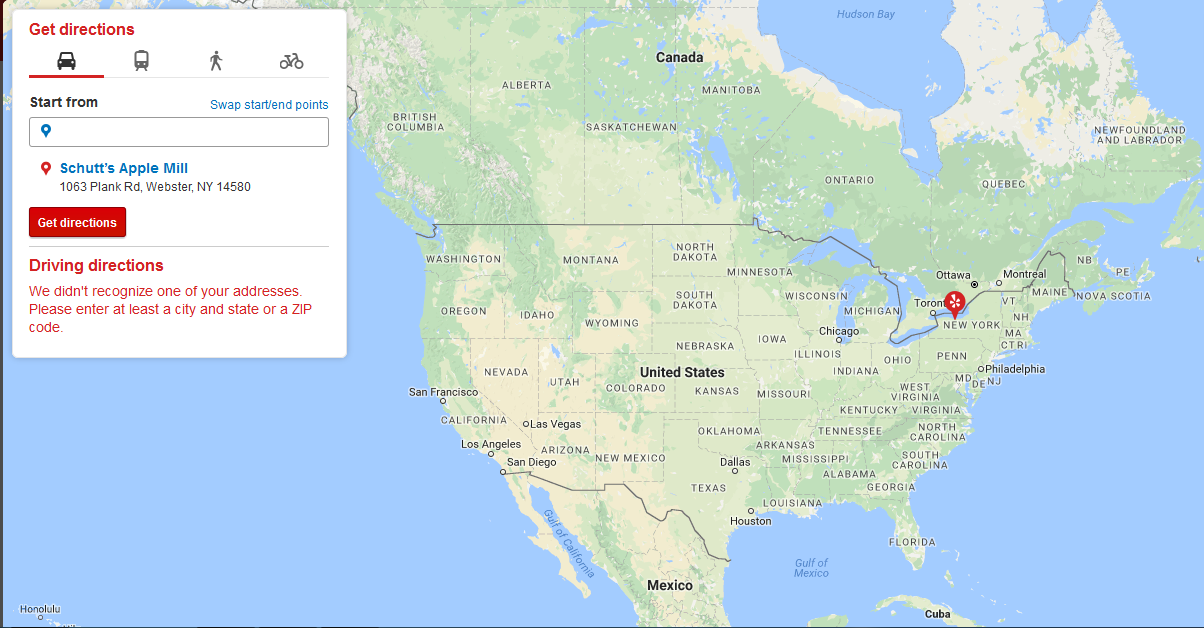 The following map shows the state Alberta in Canada with the place Mayerthorpe. 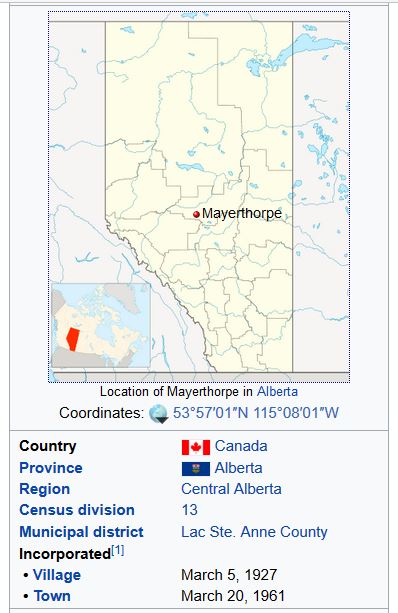 The next map shows Mayerthorpe and Edmonton. 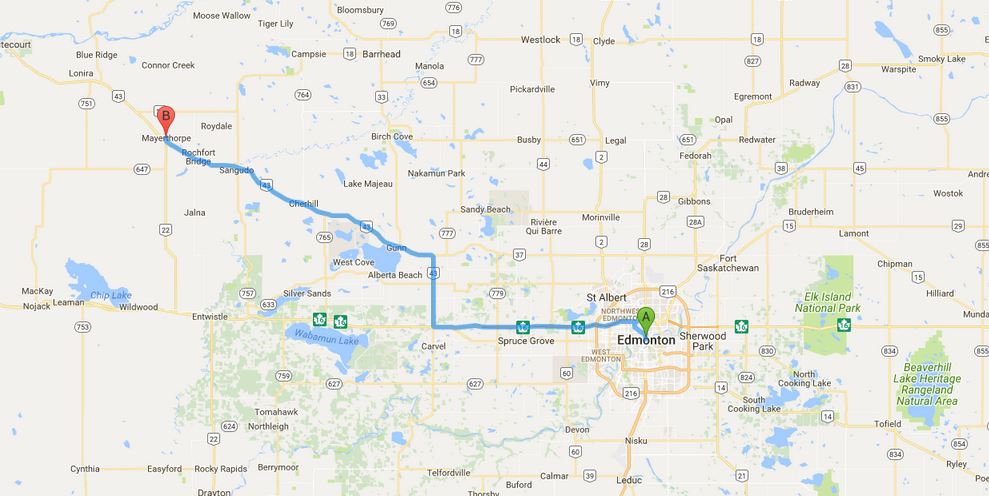 The following map shows the state New York and its surroundings. 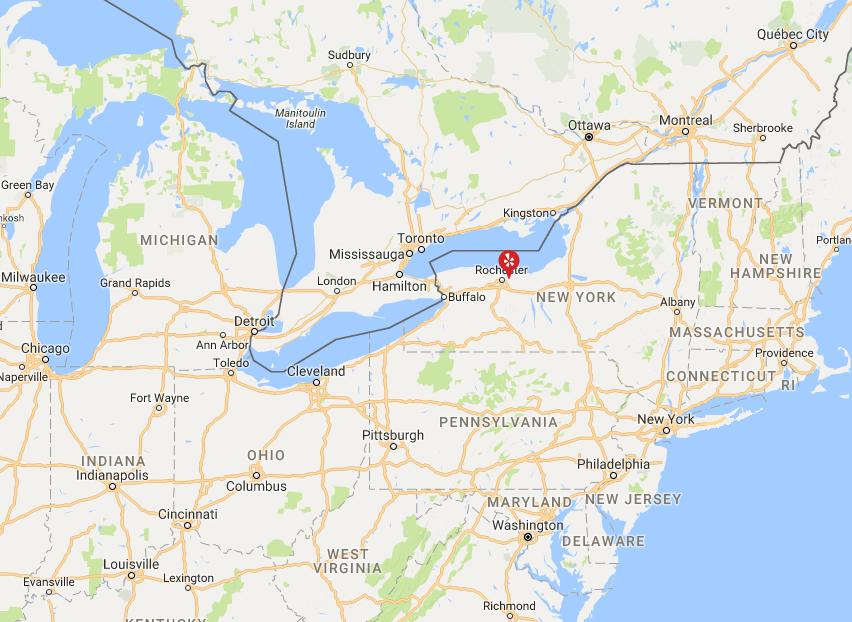 Now follows a map of the state New York. 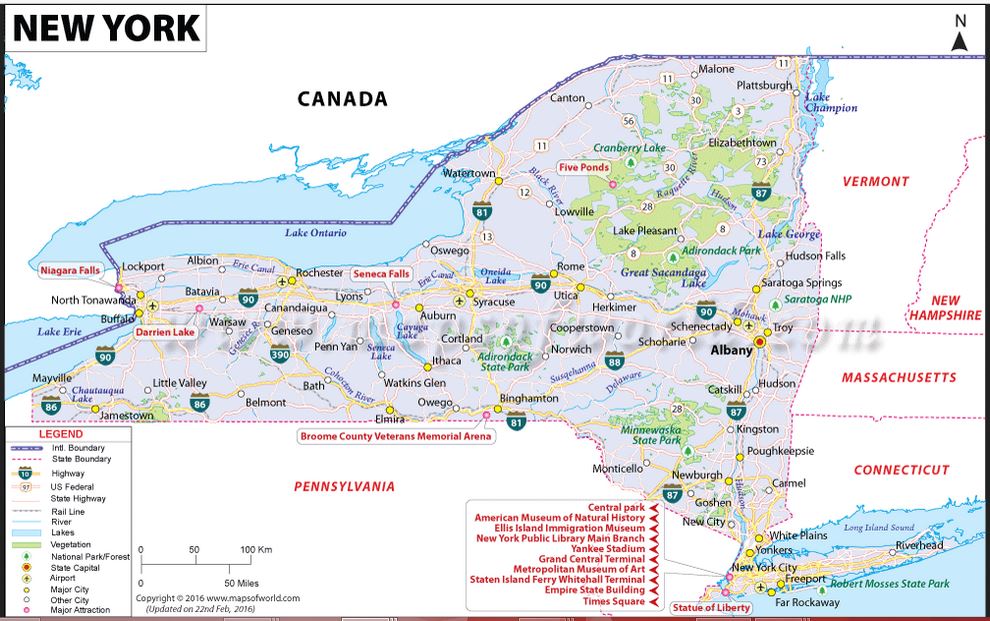 This map, which comes now, shows Buffalo and Rochester and Webster.

Now comes a map with Rochester and Webster. 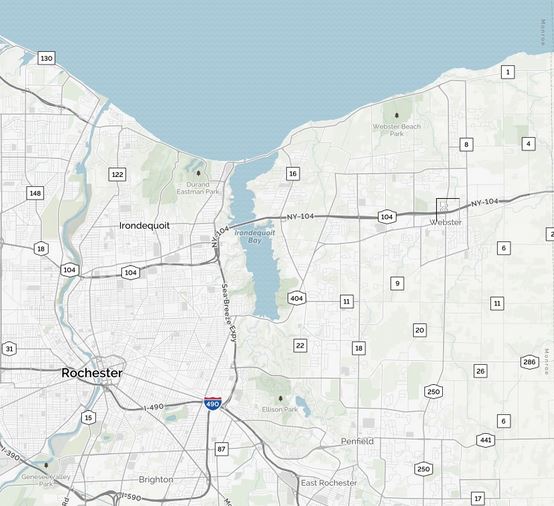 Now a map which shows Webster and Plank Rd and the estate of Schutt. 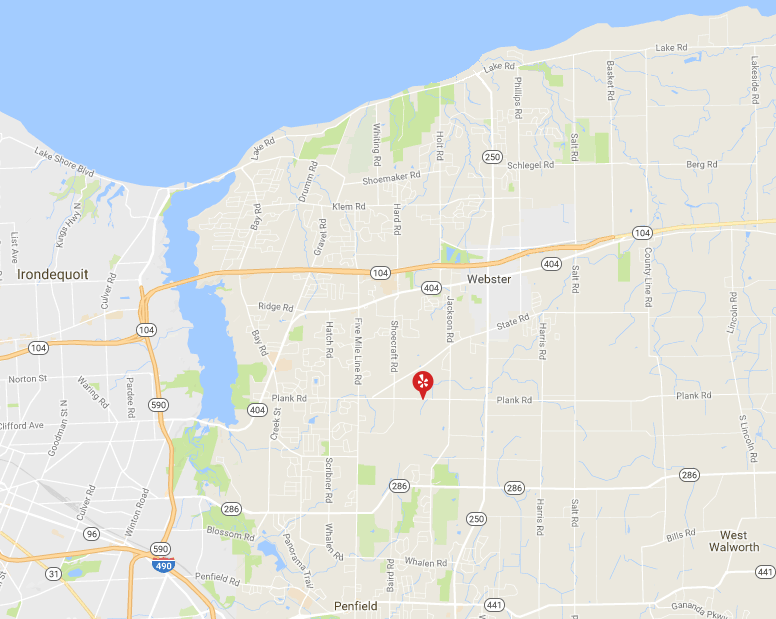