Relatives on father's side:

Relatives on mother's side:

Now follows a picture showing relatives both from on the father's side and on the mother's side. 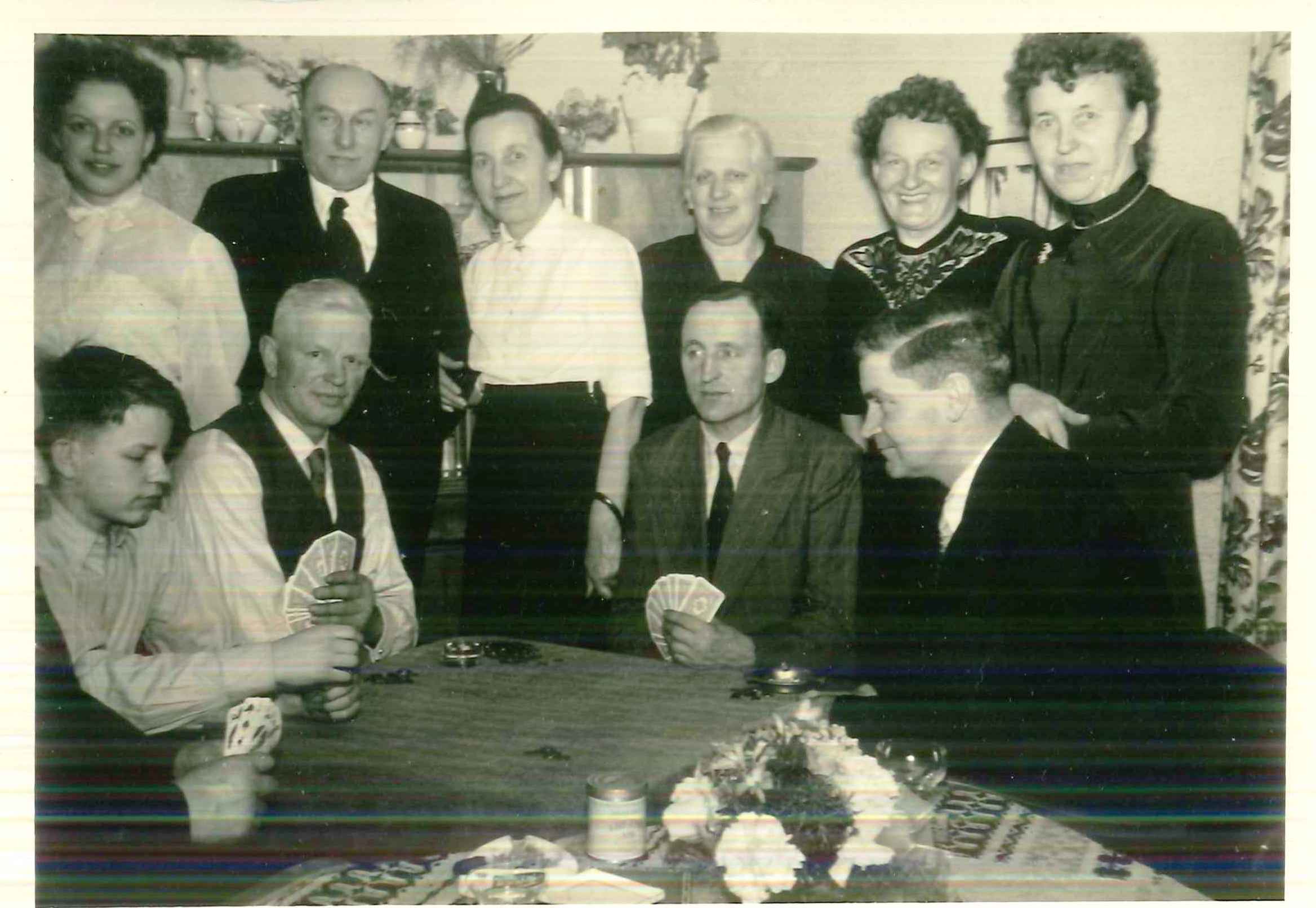 Silver wedding of my parents Walter and Lina Preuş on the 30.03.1955 in Bad Salzdetfurth

The Werners were relatives of my father. They also lived in Bad Salzdetfurth. The mother of my grandfather Gottfried Preuş was a born Werner, Mathilde Preuş, née Werner.

Lina Gehrmann, née Preuş, was the only sister of my father. She lived in central Germany, an area of Germany, that was then controlled by the Soviets and was a dictatorship. She was then 56 years old and probably had the authorization to visit West Germany, which was then, before the building of the Wall in Berlin and the coming down of the Iron Curtain, still possible. Perhaps she was classified as dispensable by the dictatorship, in the case that she did not return, but she returned.

Ida Neumann was the oldest sister of my mother and Bruno Neumann was her husband. Also they lived in Bad Salzdetfurth.

Bruno Mattern was the youngest brother of my mother. He lived in Almstedt, a place only a few kilometres away from Bad Salzdetfurth. He was master gardener and owned there a nursery.

My uncle Bruno Mattern was really an extraordinary man. He was one of the few men who spontaneously resisted the National Socialist system, when the urge for freedom for himself and for his family members obviously required this. On the 19.01.1945 he decided not to return to his service as soldier, as instructor, to Potsdam, but cause the escape of his mother and the escape of three of his sisters including their families and to organize and lead it. Both, the staying away from service and also the giving up of every square metre of German soil was punishable by death.

And with the rescuing of his own family, his wife Elly and his daughter Monika, he reacted again the same way and advised his family to resist commands and to flee. Here an extract from a report of Georg Neumann:

On Monday, the 29.01.1945, Uncle Bruno surprisingly returned to Potsdam. He had brought the trek to Marienburg and was there held by a military control; so he had lost it in the night to the 24.01. On risky ways he succeeded making his way through to Potsdam. He feared that we would get into contact with the Soviet army and advised us to travel on with aunt Elly to the west. So the addresses from our list were written to and asked about accommodation. As a result Marlies Schneider from Bad Salzdetfurth told us that she keeps accommodation ready for all of us. When we then heard from Uncle Bruno that he must move to the front on Thursday the 08.02., we fixed the 09.02. as day of our travelling on. My father has heard no longer about this intention and thought us still in Potsdam.

Uncle Bruno Mattern was then also the one who initiated the fleeing on of his sister Ida Neumann, née Mattern, and her son Georg Neumann, and for his sister Gertrud Pelz, née Mattern, who then stayed with him.

For five of his six sisters Bruno Mattern was therefore the initator of their escape. Perhaps even also for the sixth, Edith Wasgindt, née Mattern, because Georg Neumann reports, that Uncle Bruno Mattern phoned Lˆpen on the 21.01.1945 in the evening from Hagenau, and Wasgindt's had telephone, perhaps he also phoned there.

This leaving of Potsdam was also in so far of importance, as Potsdam then became a part of the area of influence of Stalin, therefore lost its freedom for decades, then belonged to Soviet Germany. Many people, also some of my relatives, fled from the east or were there driven out, and then did not have the foresight and the energy and the will to be free, and just made it to the centre of Germany and spend the rest of their life in slavery and their children then went to school in that system and were hypnotized right from the beginning so that dictatorship and materialism and atheism became their ideal.

Uncle Bruno Mattern was born on the 18th of February 1916 and died in April 1992 and spent, so as I remember reports, his last minutes together with his horse or even on his horse outside in the open fields.

I was once visiting Uncle Bruno in Almstedt. Suddenly he asked his daughter to move the clouds. I imagined her taking a long rod and shifting the clouds. Then it occurred to me that that could have something to do with shade devices at greenhouses.