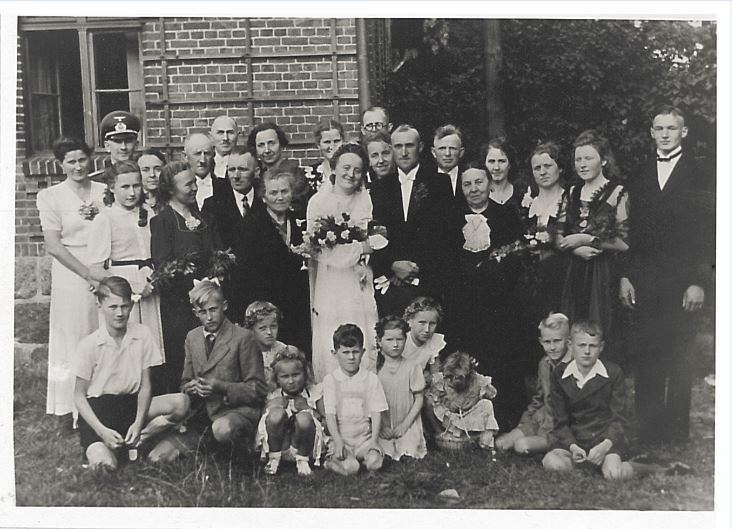 Kneeling and sitting, from left

An extract from a report follows, which Waltraud Hilke, née Gehrmann, has written on the 24. July 2005.

In the war year 1941 the last wedding took place in Kranthau, on the 4. September Aunt Edith married Karl Wasgindt from Pr. Eylau, he was a brother of Pastorin Kallf from Eckersdorf; they had met there. Despite the war time the farm in Kranthau still once again exerted everything, what belonged to a wedding. Lina and Walter were charming hosts; grandmamma now saw her last daughter got hitched and as farmer’s wife on Karl Wasgindt’s farm.

Most participants of this wedding were then also those, who also played a role in the Escape diary.

So the wedding took place on 4.9.1941. I assume that the picture was taken in Eckersdorf after the church wedding. The son of the hostess and the host was then more than 2 years old, but does not appear on the photo, perhaps already then it was noticed that he would develop a dislike for religious cult activities.

But more interesting is the absence of the brothers of the bride. All four of them were perhaps away because of the war.

Of the oldest brother Fritz it is known that he was reported missing 1945. 1941 he was therefore alive; he then had a son, 6 years old, and a daughter 5 years old; he is absent, but also his wife and his children are absent.

Of the second brother Oswald it is known that he fell on the 19.4.1944 in Croatia. He was therefore then also alive, but also not present. He had three sons, the youngest was then already 3 years old, but all three and their mother are absent.

The third brother Franz died 1948, was therefore then alive, he had then a 2 year old son, but his wife is absent.

My cousin Helga Wasgindt has send me an email to find out if I can be contracted and announced: "You are lacking names (which I all have) to the persons on the wedding picture of my parents."

I was very pleased about this offer and thanked her for it and then got from her the lacking names. Here now the completion from Helga Wasgindt: