The content of this webpage is the map Kranthau.

The map Kranthau is divided into 6 graphics.

The map was brought along from East Prussia and all entries made by hand come from members of the family.

The 6 graphics are the 3 parts of the upper part of the map and the 3 of the lower part, in the following arrangement:
^
kr1 kr2 kr3
kr4 kr5 kr6

A description of particular details follows the graphics. The descriptions often relate to the webpage Escape diary. The family relationships, at least that of my ancestors, can be followed in the Genealogical table.

The original size of the map can be gained on the screen by adjusting the browser so that the 5 centimetre, which are shown in the top left, vertically, on kr1, are also 5 cm on the screen. And that can again be checked that the width of the graphic amounts to about 21 cm, the width of a DIN A4 sheet.

Since the scale of the map is 1:25000, distances can be measured with a tape on the screen, when the 5 cm, which are shown above, on kr1, are also 5 cm on the screen. Four centimetres are then 1 km in nature.

A good way to read the webpage, is to open it twice, in two different windows, and having the text on the one side and the map sections on the other.

Now follows the first graphic; it is kr1; it is the left upper sixth of the map. 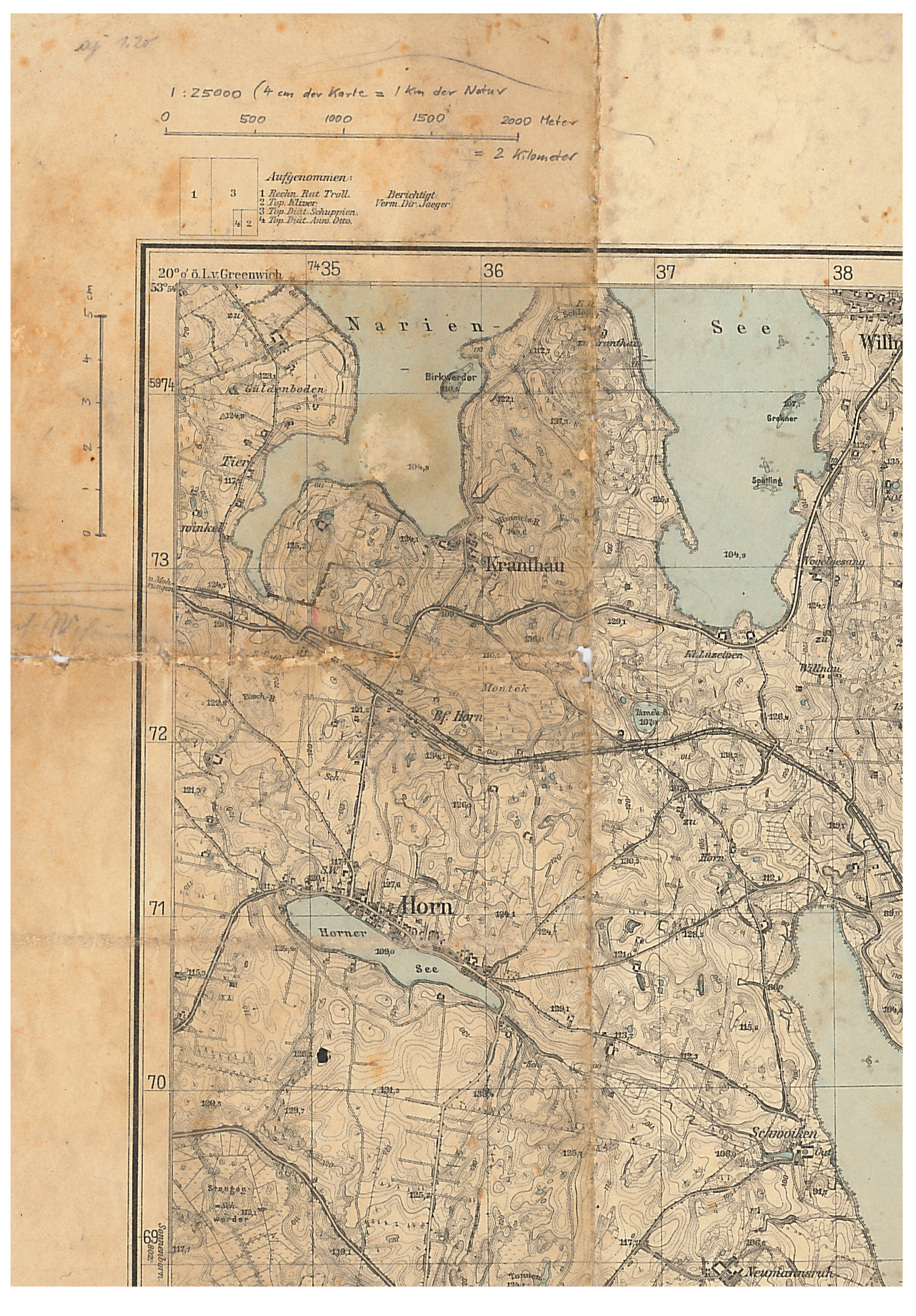 On this first sixth of the map Kranthau, kr1, the sixth of the left upper corner, the following details can be seen:

At the very top is a pencil note, which looks something like "aj 1,20" ľ I assume that this is an entry of the seller of the map and that the map has cost 1.20 Mark.

The hand entry a little bit lower regarding the scale in the upper margin and the hand entry on the left margin, which shows the 5 cm, are pencil notes. I have made them years ago.

To the left of the word Kranthau and of the farmsteads in Kranthau, there is a further hand entry, which was done with a ruler and with black or blue ink. It shows the borders of the property of the Family Preu▀ and that is the southern and the eastern border, and was certainly done by members of the family Preu▀.

The northern and the western borders of the property Preu▀ are formed by the bank of Lake Narien, Narien-See.

The farmstead Preu▀ is in the middle of the property, and farmstead and farm are on a peninsular of the Narien-See, at the south western end of the lake.

On the next webpage, Home map of district Mohrungen, are also such entries by hand. And there are still in addition the forest part shown and also a part of the property in the village.

Both maps were brought along by the family Preu▀ in the year 1945 from East Prussia.

A further hand entry is immediately under the 5 cm; there someone has extended the road to Mohrungen and also written underneath "nach Mohrungen" or something like this, even though this is also printed, very small, in the margin.

A further hand entry is a red line, which goes from the lower corner of the property Preu▀ southwards, towards the road to Mohrungen.

This way was used as an exception on the 21. January 1945 for a vehicle. Normally this way was only used by pedestrians, to get to the railway station Horn for example.

On the 21. January 1945 we therefore took this way, the way over the farm to the southern corner of the property and then over Steckelĺs field to the main road and then to Mohrungen.

The waterlevel of the Narien-See was 104.9 m above sealevel and the highest point of our property was 125.2 m, therefore 20.3 m above the Narien-See. The Himmelsberg, (Heaven Mountain), directly above the word Kranthau, was 144.6 m high. The area north of Kranthau was, according to this map, hilly and was for that reason probably not used for fields, but as forest.

The place Horn was about 2 km away from our farm; the railway station Horn but about only 1 km.

Our property, as its boundaries are here marked in handwritten, has about the measurements 0.5 km x 0.7 km and that are 0.35 square metres or 35 hectare. On top of that the forest area has to be added and an area next to the village. Everything together it is to have been 45.69 hectare: "Our farm property in Kranthau (above the lake) was registered in Volume 1 Page 7 with 45.69 ha (182 acres); that were 31 ha fields, 1.69 ha meadows, 3 ha grazing land and 10 ha forest."

There exists an entry about the neighbouring place of Kranthau which is closest nearby. It is Klein Luzeinen. It is east of Kranthau, at the south east end of the Narien-See. 01.02.1946: "The young Mrs Lange from Klein Luzainen was shot dead by the Russians, when she against Russian orders still went to feed the livestock. Her son came out with on the 3.11."

The place Horn, south of Kranthau, had in addition to the railway station also shopping possibilities, tradesmen, school, post office.

About the brother of my mother, Fritz, my cousin Waltraud Hilke, née Gehrmann, writes: "Fritz had made a grocer apprenticeship in town and got fitted out a grocer shop in Horn, which he ran with his wife; the house lay at the way from the village to the railway station. As child I have been with him in the shop with Aunt Anna and Cousin Ursula and he gave us a bag of sweets. Anna was the sister of my father, married with the master joiner Max Amling, whose workshop and house stood quite nearby."

My Uncle Richard Gehrmann was born in Horn on the 19.5.1889. He was the husband of Grete Gehrmann, née Mattern, a sister of my mother.

The main road, which comes from Mohrungen, then proceeds further around the lake, to Reichau. I can remember this main road, and an Opel-Blitz, which drove on it.

West of our farm, on the other side of the arm of the Narien-See, Tierwinkel can be seen. Sometimes dog barking could be heard from there.

Completely down to the right is Neumannsruh. In the family documents is the following information about the neighbouring places of Kranthau: The estate Neumannsruh, owner Kreddig, Arthur, was 600 acres in size.

Now follows the second graphic; it is kr2; it is the middle upper sixth of the map.

After that then again descriptions of details. 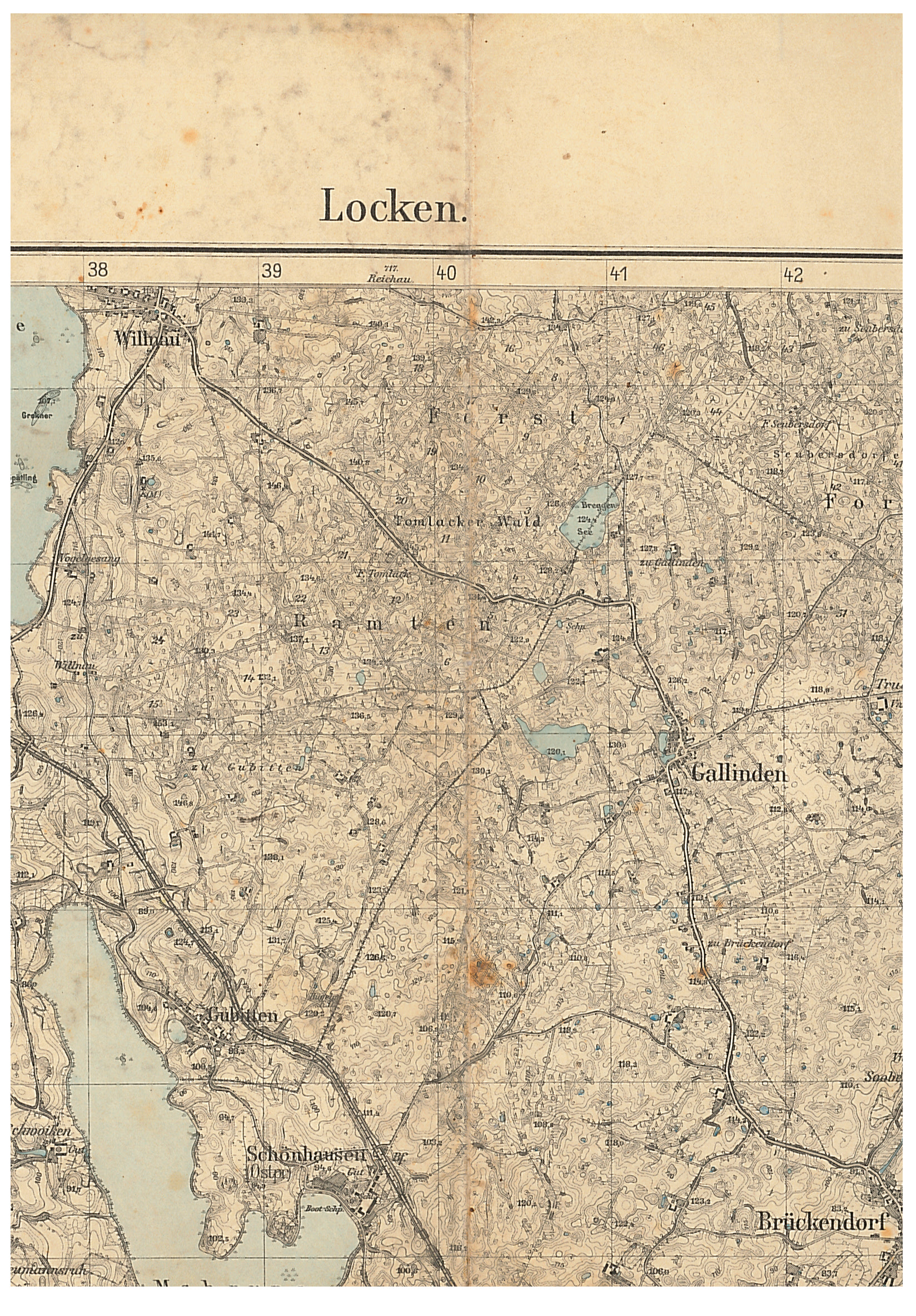 On this second part of the map Kranthau, kr2, the sixth in the middle on top, the following details are seen:

Completely at the top in the margin of the map, immediately under the heading of the map "Locken," stands "Reichau." And above Reichau stands 717. That could be the Me▀tischblatt (ordnance map) 717.

We often went to Reichau. There the family Wei▀ lived. Emma Wei▀ was a sister of my mother.

And now follows the third graphic, it is kr3, it is the upper right sixth of the map. 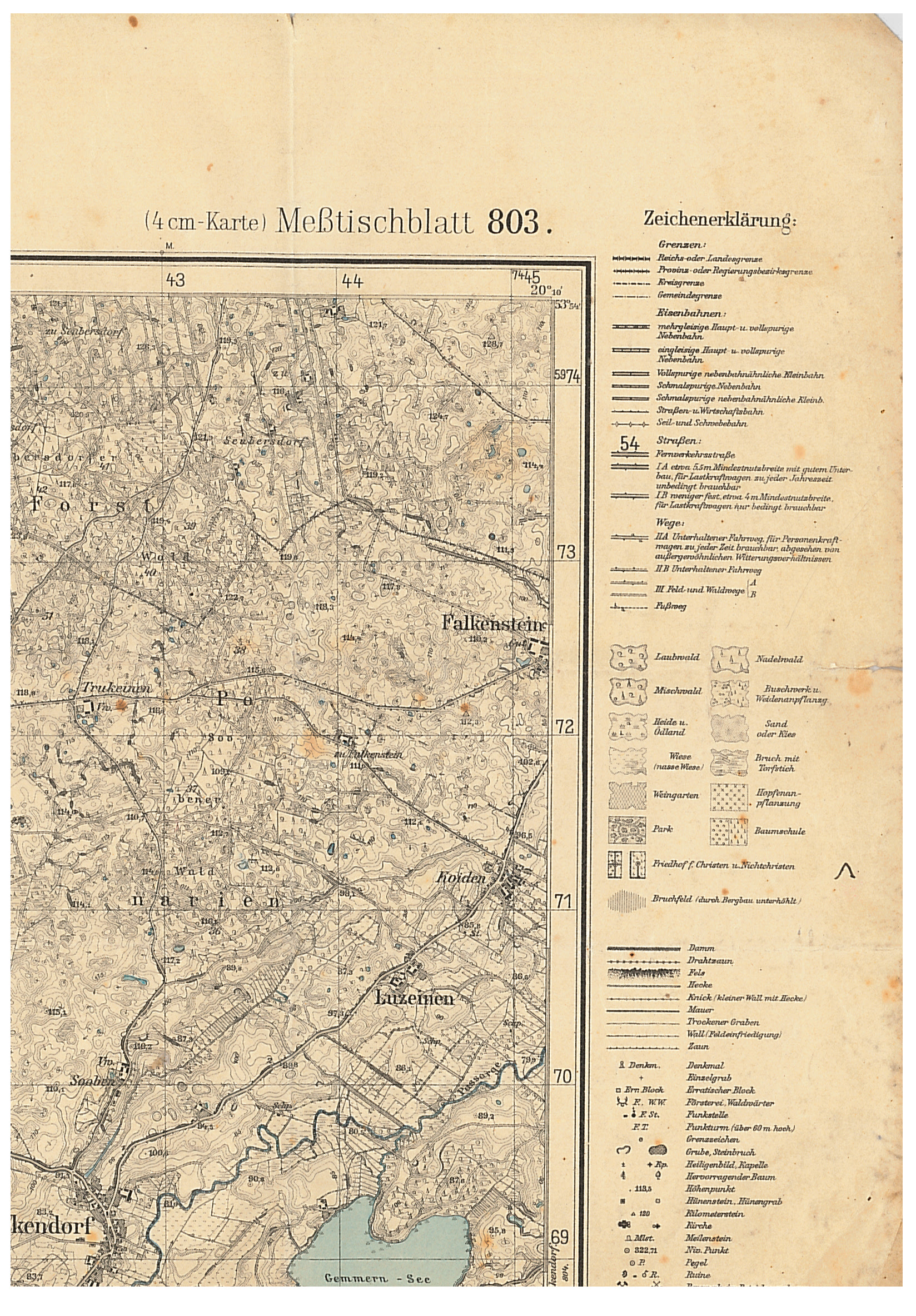 On this third part of the map Kranthau, kr3, the following details are shown:

East of the Passarge the Ermland began. I often heard the word Ermland.

I believe this area was Catholic. And that probably came into being because the Ermland only came to Prussia later than the rest of East Prussia. Prussia was originally Brandenburg and was then called Prussia, because Prussia, therefore West and East Prussia, did not belong to the empire, and with the name Prussia probably also more independence from the empire was given and one could then also be a kingdom. When the ruler of Brandenburg, I believe it was in Spandau, became a Protestant, automatically all his subjects became Protestants. Since the Ermland then only joint later, they could probably remain Catholics. Then the ruler was no longer such an absolute ruler.

And now the fourth graphic, kr4; it is the lower left sixth of the map.

The church was in Eckersdorf.

The church is clearly visible on the map inside the place.

Now the fifth graphic, kr5; it is the lower middle sixth of the map. 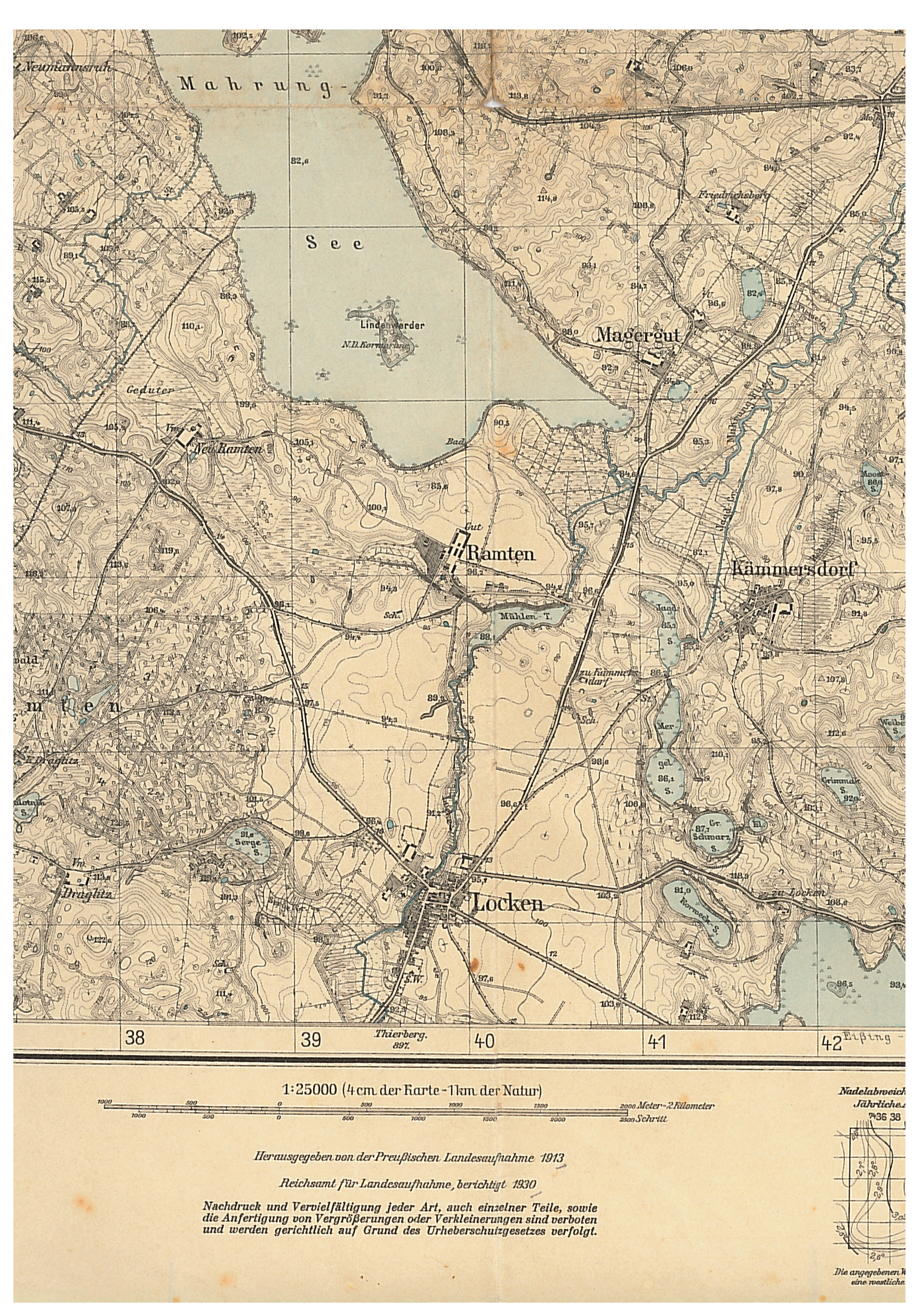 The map is named after Locken, because it is probably the largest place on the map.

Locken is in the district Osterode.

At the bottom of the map is the note: "Reichsamt fŘr Landesaufnahme, berichtigt 1930". So this map was revised 1930. My parents built a house for a worker on the farm next to the way to the village of Kranthau; and that was 1937, and this house is therefore, correctly, not shown.

Now to the sixth graphic, kr6; it is the lower right sixth of the map

This section of the map then also forms the end of this webpage. 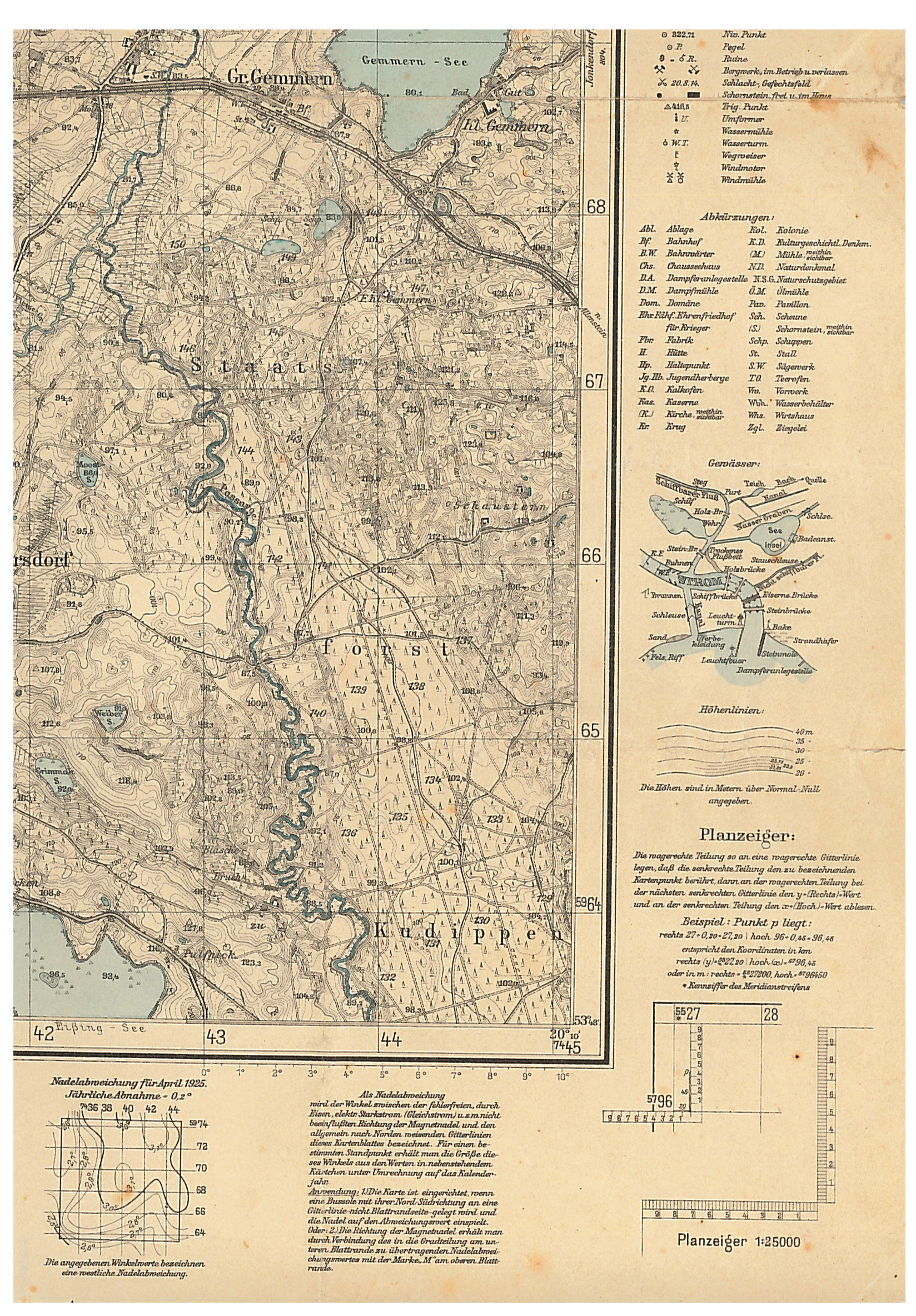