This webpages brings information about Mohrungen and Preußische Holland, the towns and the districts.

The first thing is a map that shows Neuendorf, the birth place of my father. 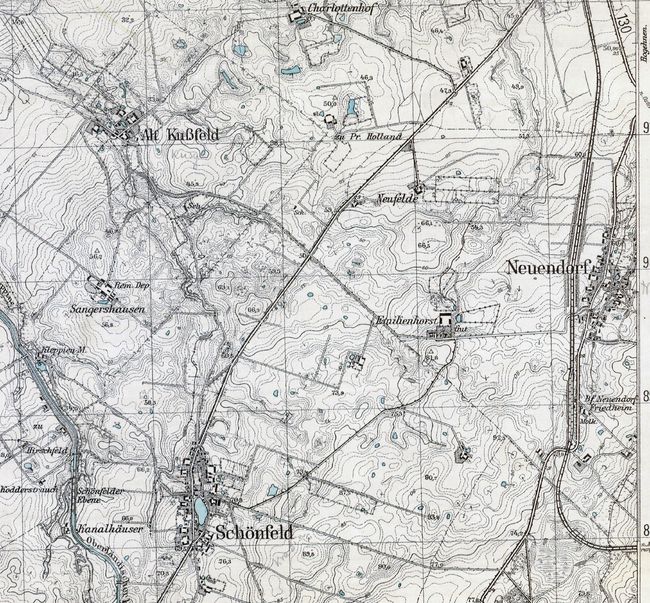 The next map shows the district Preußisch Holland.

North east of the town Preußisch Holland is Schlobitten. The words "Dohna Schlobitten" I have heard often in my childhood and youth.

East of the town Preußisch Holland is Schmauch, the first overnight stay of the trek from Reichertswalde. The second was Tiedmannsdorf, north from there, seen at the very top.

North west of the town Mohrungen, to be seen at the very bottom, lies Hagenau, the first overnight stay of the trek from Kranthau, at the Narien See, which can be seen at the bottom right in the corner.

To the left at the bottom in the district Preußisch Holland lies Reichenbach. I was there on the 23. January 1945 and there we heard rifle fire and there the really dangerous part of our journey began and we changed direction and did not go to Christburg, but to direction Posilge. 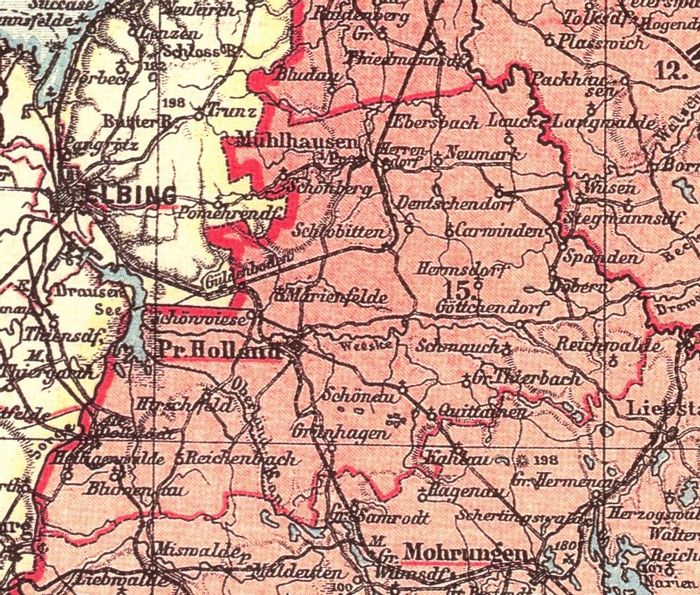 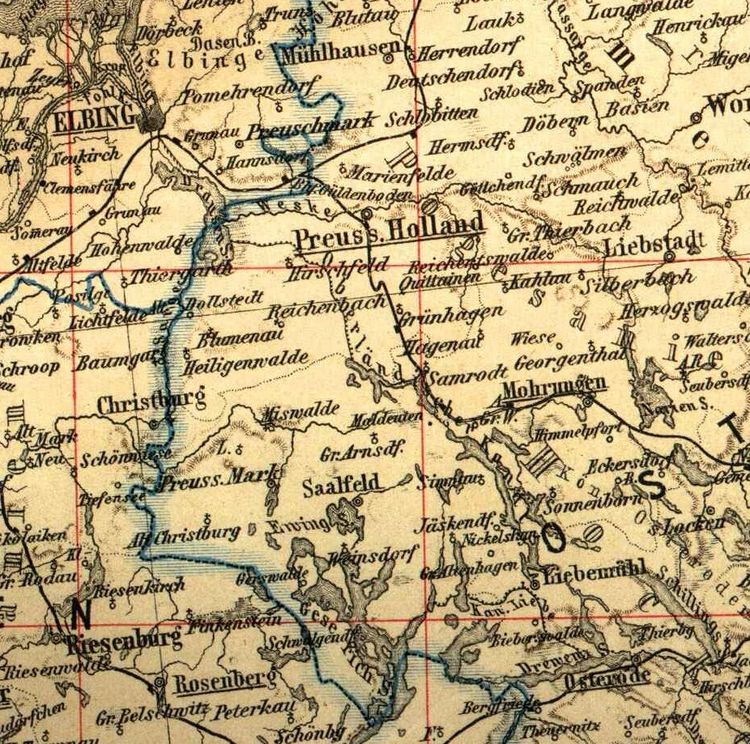 The next map shows Saalfeld in the district Mohrungen.

At the very top to the left is Löpen and Buchwalde, and to the right of it, therefore to the east, the Oberländer Kanal, there where the Geneigte Ebene is. The border is shown blue. 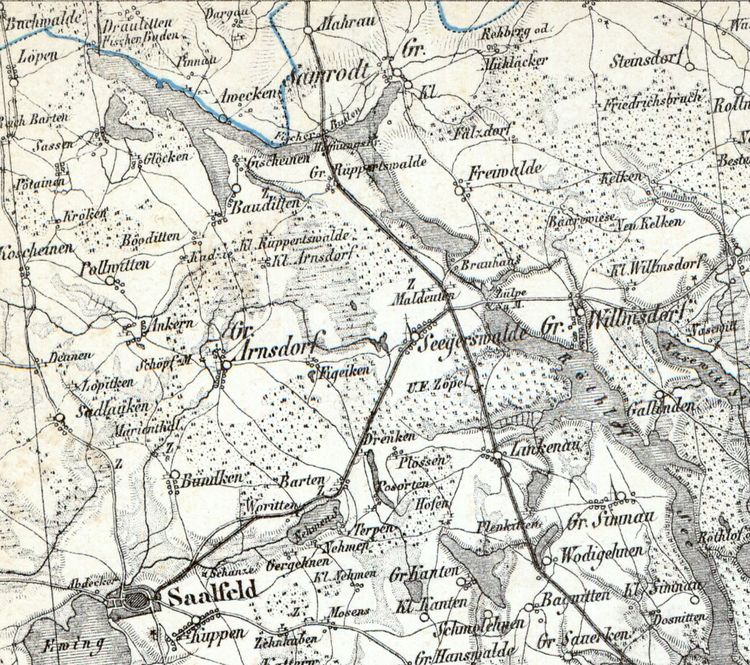 The next map shows Christburg, in the district Stuhm. There the three districts Stuhm and Pr. Holland and Mohrungen come together. The district borders are blue.

We wanted to trek in direction Christburg, but then changed the direction, and made way by rather going more north. 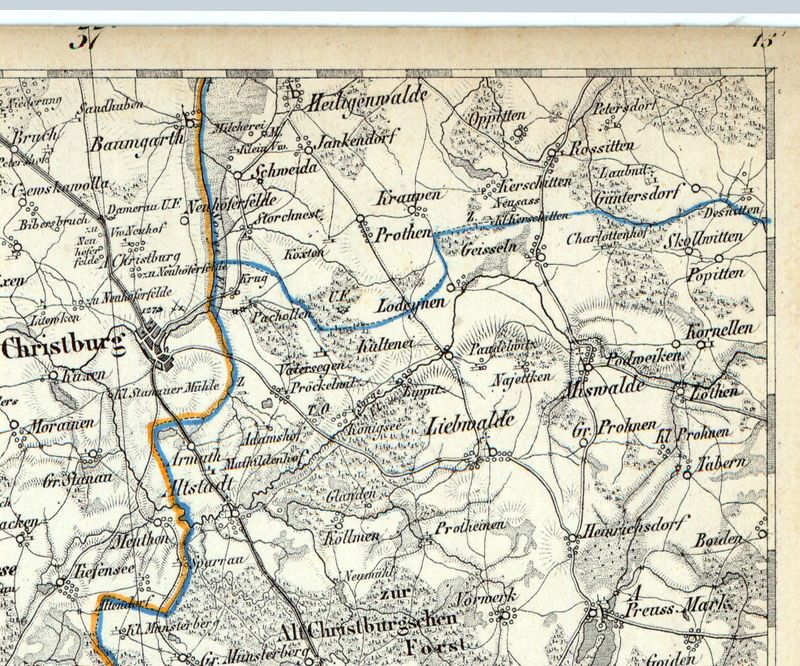 The next map shows Mühlhausen, in the district Pr. Holland.

Schlobitten is further down, more to the right. My great great grandfather, Christian Lembcke was born in Schlobitten near Herrndorf on the 7.9.1795. And he died on the 23.10.1880 in Koken, near Steegen. And Koken and Steegen are seen on the map after the next, at the very top. 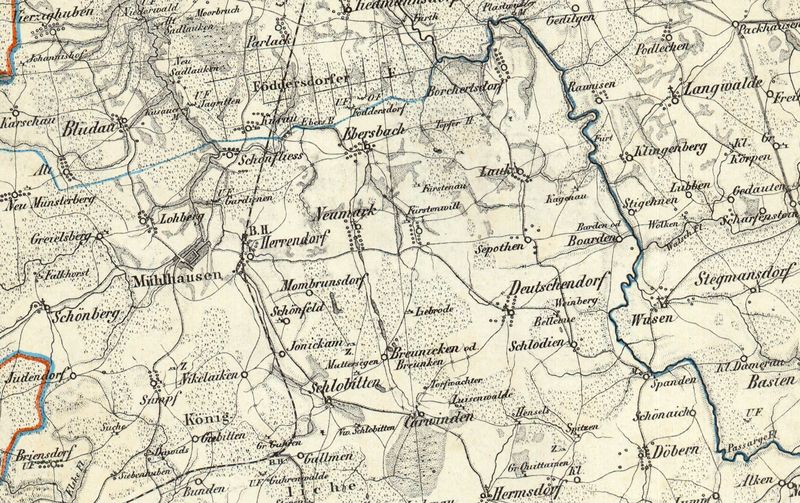 The next map shows Liebstadt, in the district Mohrungen, completely to the right.

Koken and Steegen are at the very top, to the left. Neuendorf is south of Preuss. Holland. 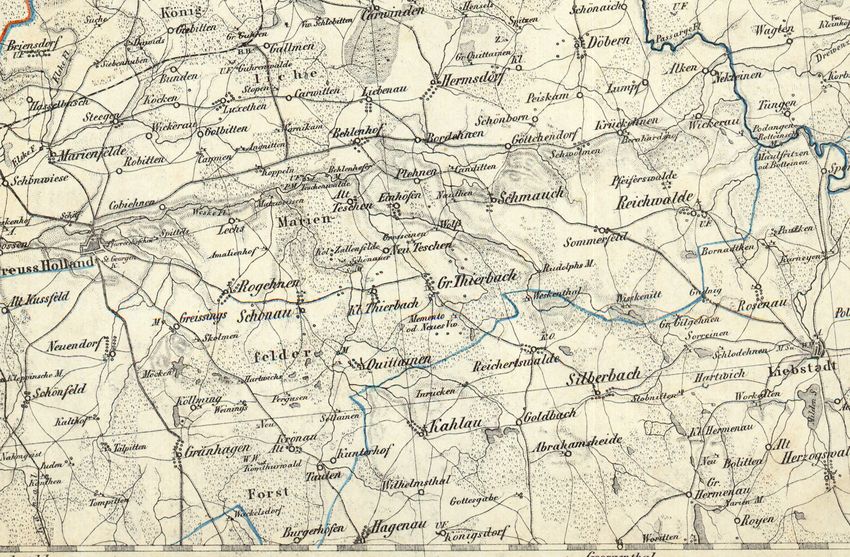 Steegen and Kocken are therefore on this map seen at the very top. Immediately to the right then comes Luxethen. In Luxeten was Gustav Heinrich Gehrmann born on the 15.5.1893. He was the son of Friedrich Gehrmann and of Wilhelmine, née Morgenroth. This can be seen from a document of the registry office Steegen, Registry Nr. 21. Gustav Gehrmann was the husband of my aunt Lina, the sister of my father. So the study of such maps makes it therefore easier to understand the connections of a family history.

The next map shows the parishes in the district Pr. Holland. 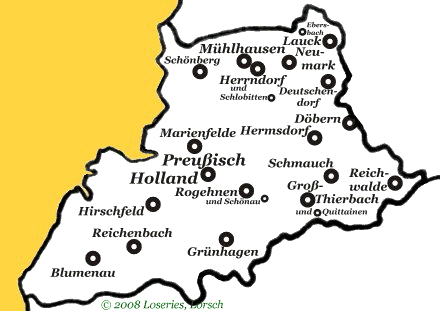 It looks as if the railway line from Elbing to Königsberg was not built directly in that direction, but that a detour was mad, to give Schlobitten a station. But that was probably because of the Elbinger Höhe. 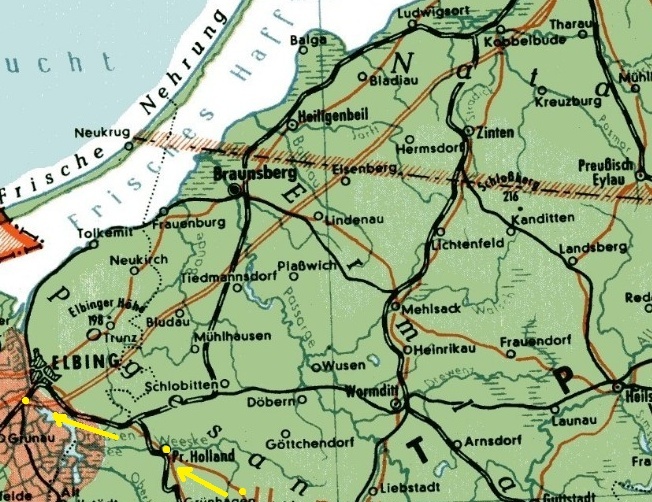 The next map shows Schlobitten.

The words "Dohna Schlobitten" were often mentioned. When the Dohnas were visited by the emperor, perhaps for hunting, then he could live there in a castle especially built for him. Perhaps the railway line from Elbing to Königsberg was also taken to Schlobitten, so that the emperor could get off there. But that estate was of course above all a great producer of food for the empire and the station served the dispatch of freight. The size of the estate one can recognize by the size of administration building: Vw. Schlob. To see the emperor was then an event of a life time. But the main reason of the lineation of the railway line was probably to bypass the elevation east of Elbing. 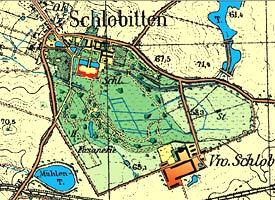 The next 3 maps are town plans of Mohrungen. 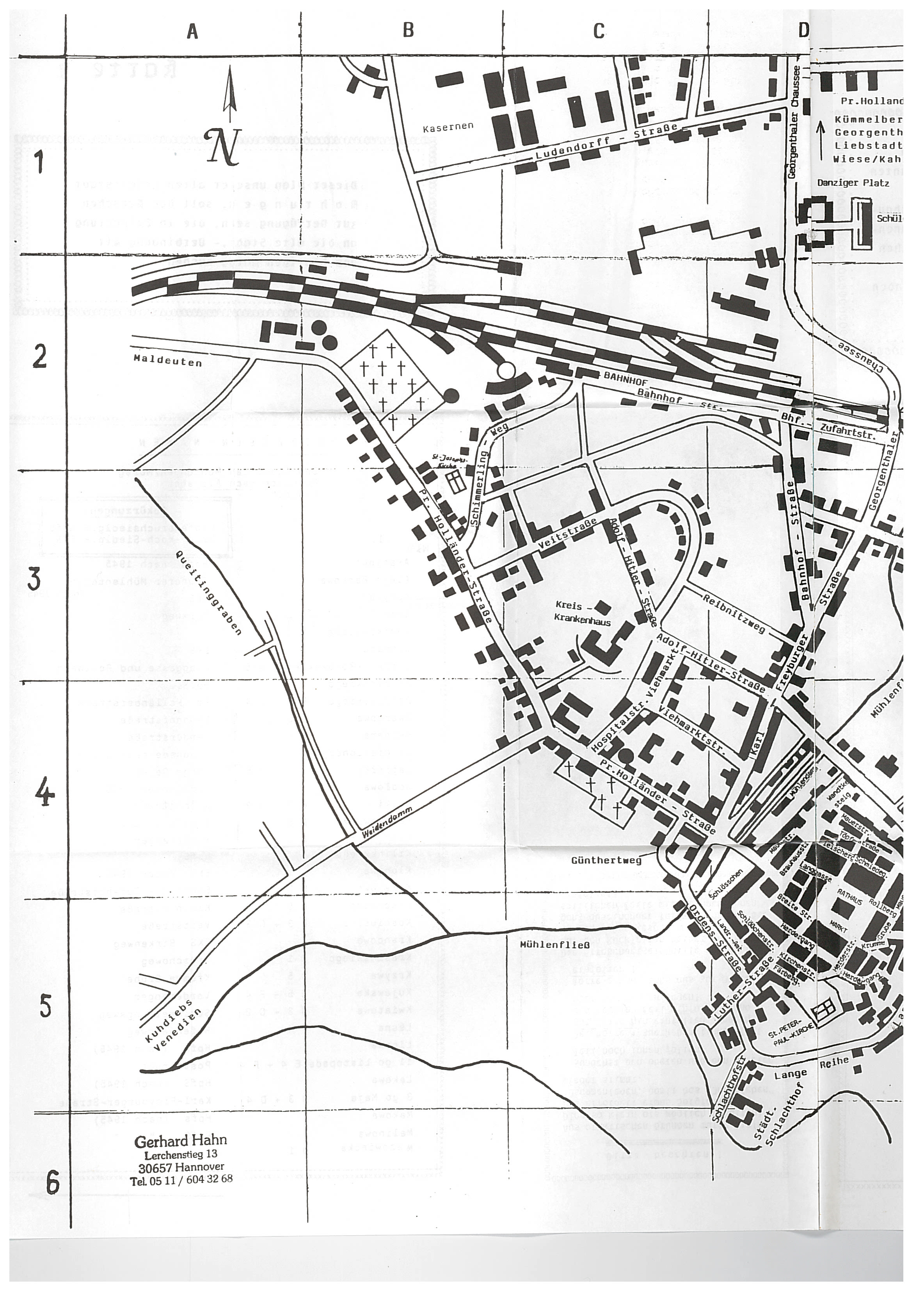 In grid square C 3 is "Kreis-Krankenhaus" (district hospital); it is the place of my birth. 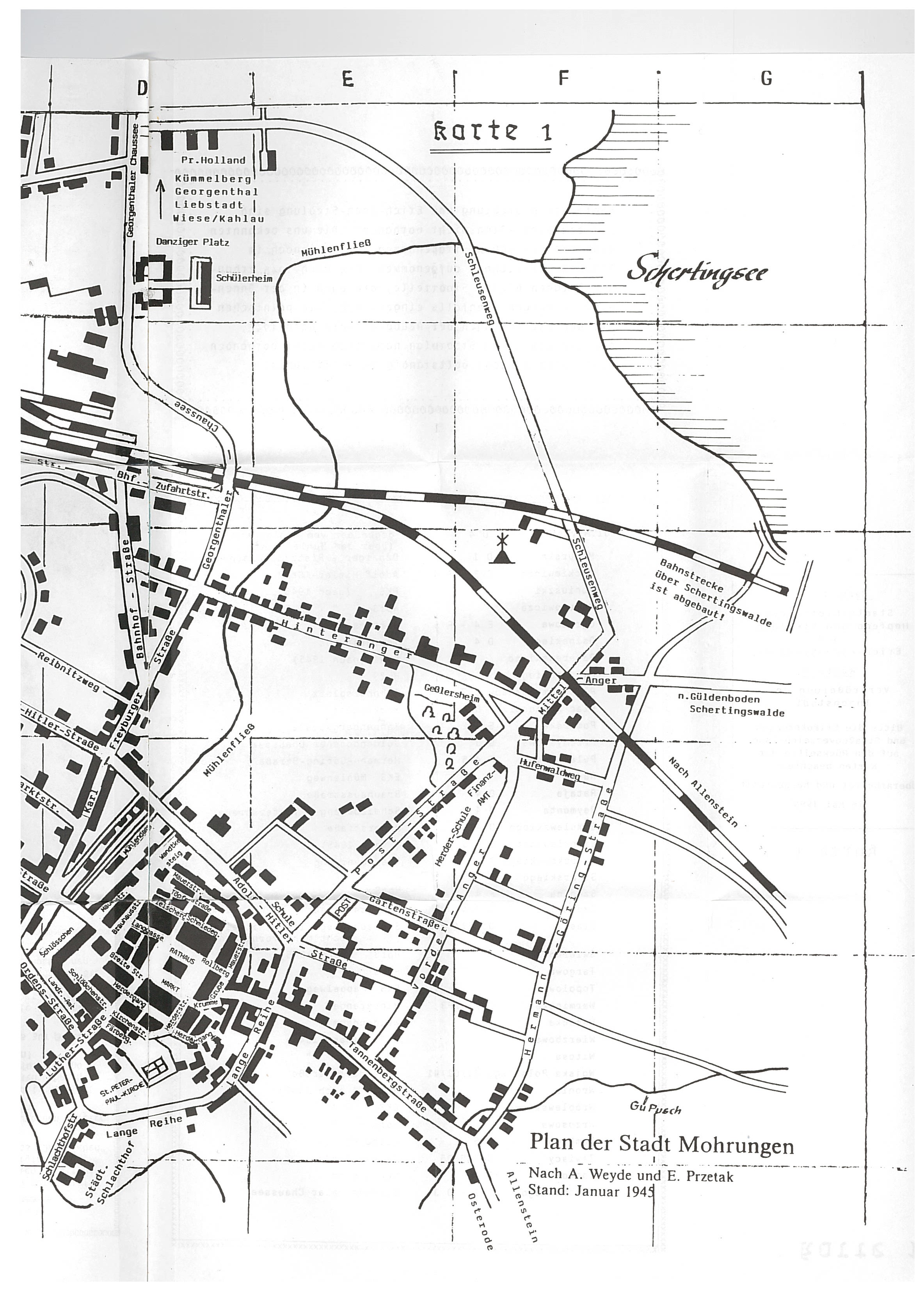 Between Post-Straße and Vorder-Anger is the Herder-Schule (Herder school), in grid square E/F 4. There my cousin, on the mother’s side, Rudi Gehrmann went to school

Rudi Gehrmann always went to the meetings of the former students of the Herder-Schule and after the fall of the Berlin Wall also the former students, who had lived behind the Iron Curtain joined, and Rudi met again his school friend Siegfried Gehrmann, who certainly also has the same surname, but the two were of the opinion, not being related to each other. Rudi’s wife, Irmchen Gehrmann, once said to her husband, that his friend indeed very much resembles Uncle Walter and Siegfried was then asked, whether he knows Uncle Walter. And he said that he knows him; he is also his uncle. Uncle Walter was my father and Siegfried’s mother was Uncle Walter’s sister, Lina Gehrmann, née Preuß, and so the two were still related, through the marriage of my parents.

The exit out of the town Mohrungen in direction Horn, Kranthau: Hufenwaldweg in grid square G 4 of Karte 1 (map 1) or on the next map right at the top to the right. 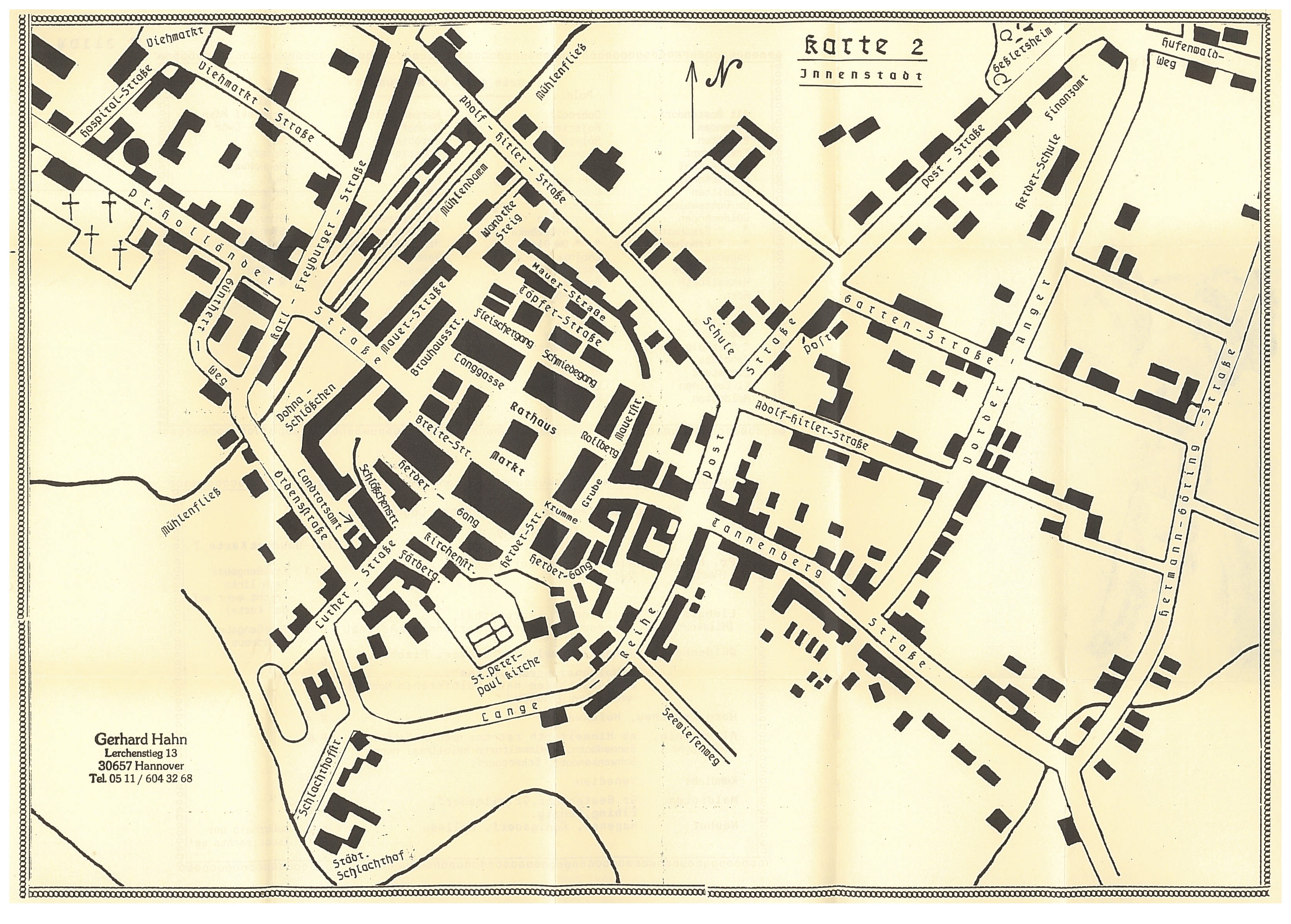 In the St. Peter-Paul Kirche (church), to be seen at the lower end of the inner city, my grandparents Leopold Mattern, from Kranthau, and Wilhelmine Weiß, from Himmelforth, got married. Himmelforth therefore probably belonged to the parish Mohrungen, and not to the parish Eckersdorf.

Also my great grandparents, Christoph Weiss and Justine Otto, both from Himmelforth, were married there.

The word Herder appears several times in the town map. On the 25.08.1744 Johann Gottfried Herder, philosopher, theologian and poet, was born in Mohrungen. 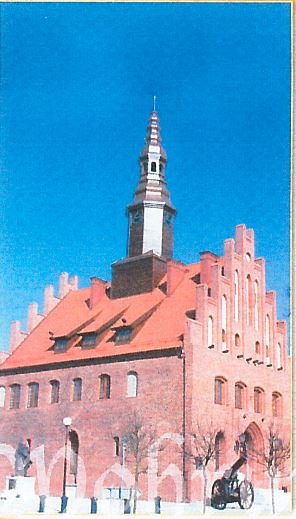 The town hall with the cannon in front of it is the best what I can remember of physical things of the town Mohrungen. 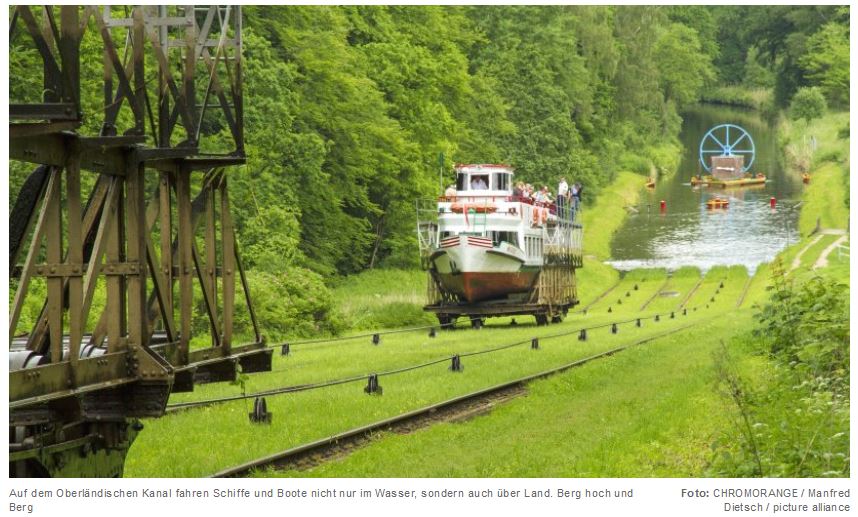 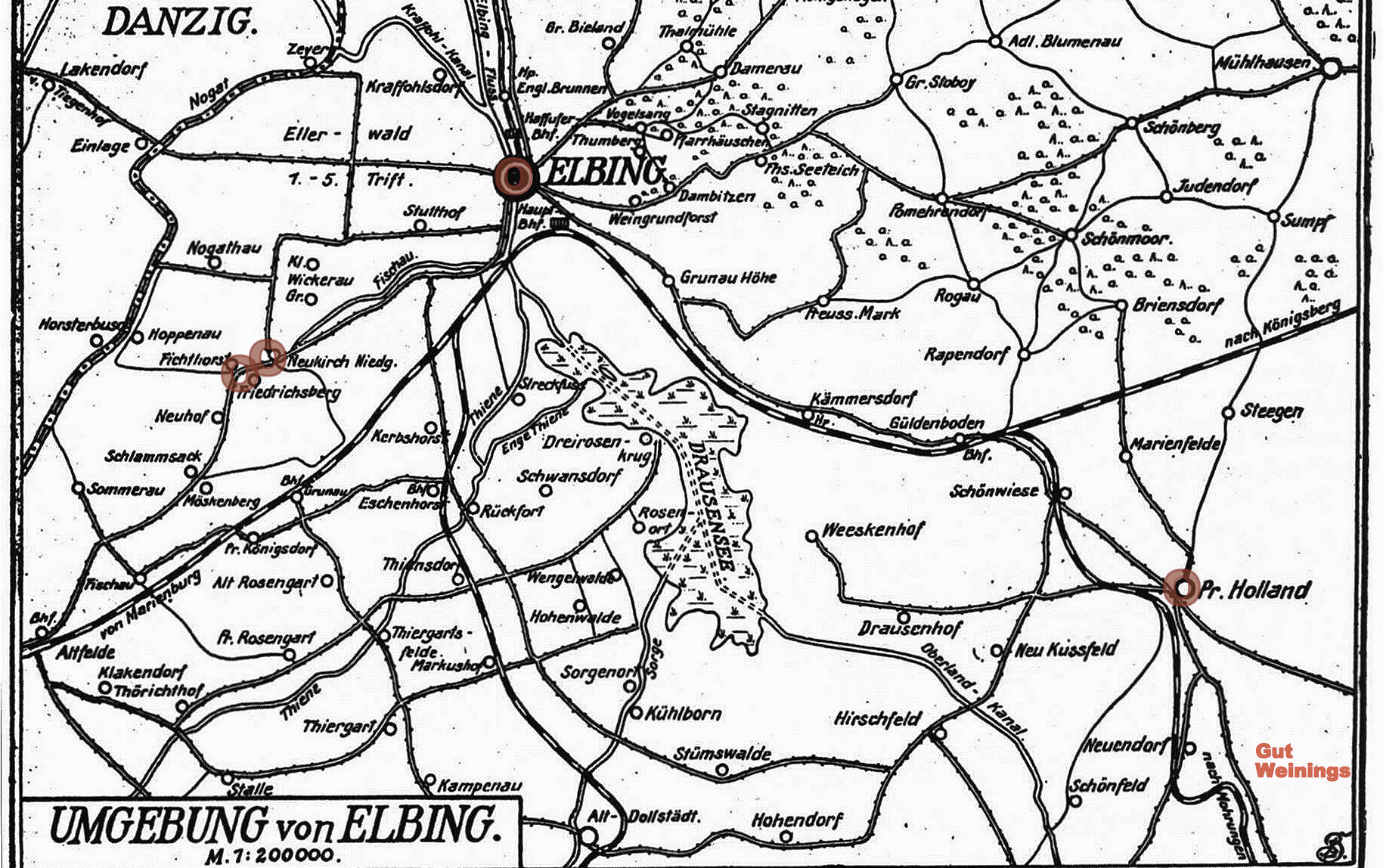 On the above map "Umgebung von Elbing" (Surrounding area of Elbing) one can see the place Gr. Wickerau. On the 20.12.1885 my great-grandfathers Gottfried Lemke died there and in February 1892 my grandparents Wilhelmine Lemke, his daughter, and Gottfried Preuß got married there. They then lived in Neuendorf, which is at the bottom of the map, to the right. There also my father was born.

East of Elbing is Dambitzen. On that estate my father Walter Preuß worked as inspector.

On this map also two places appear, which are mentioned in Georg Neumann's report.

There is the railway station Eschenhorst, where the rail trip ended. North of it the railway line from Miswalde joins the one from Marienburg, shortly before Elbing.

And again to the west is then the road from Elbing to Marienburg, where the escape of my aunt Gertrud and my cousin Georg Neumann continued on a truck.