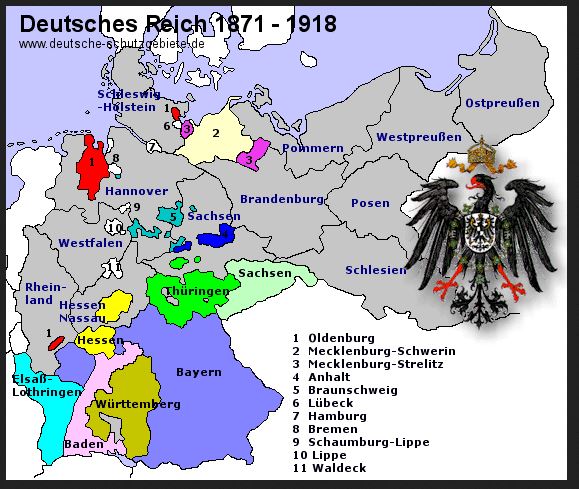 On the map the name of the largest part of the German Empire is missing, and that is Prussia. It is the grey areas.

The names of the provinces of Prussia appear in blue writing.

West Prussia (Westpreußen) therefore lies in the east of Prussia, because the original Prussia existed of West Prussia and East Prussia (Ostpreußen). When Brandenburg expanded and had conquered Prussia, it called itself Prussia. Prussia did not belong to the Holy Roman Empire and through this change of name from Brandenburg to Prussia this German land got more independence from the empire. 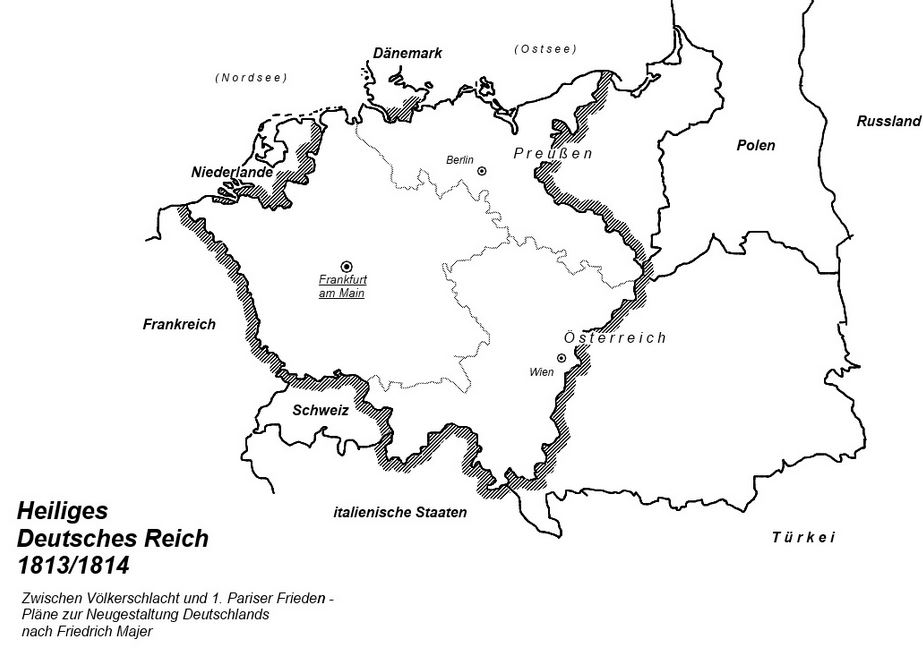 In Berlin, on the 2nd of February 1732, the king of Prussia signed a resolution, in which he declared himself to receive the protestant Salzburger in his land and to offer them there a new home. The wording started thus:

"Royal Prussian patent, concerning the acceptance and reception of the protestant faith companions emigrating from the arch foundation Salzburg into his royal majesty's land.

Friedrich Wilhelm was therefore King of Prussia, and as well elector, in the Holy Roman Empire, therefore with the authority to elect the emperor, and then also still mark count at Brandenburg.

My ancestors were born in Prussia, partly at the time of the first empire, but not in the first empire, in the Holy Roman Empire, because East Prussia did not belong to it, and partly in the second empire. In this second empire the King of Prussia was at the same time also emperor of Germany, because Prussia was already alone area wise dominant. After that they lived in the Weimar Republic and then in the Third Reich.

In the second empire, 1871 - 1918, the influence of Prussia was quite strong, and one rather spoke of the provinces of Prussia than of Prussia itself, and that then probably also meant that the name Prussia did not appear at all, like here on this map.

That has still remained so until today. If someone would say he is born in Prussia or his forefathers come from Prussia, it does not mean much to the other person, only the name of the province really gives information.

The sizes of the Prussian provinces are also about the same as the non-Prussian lands of Germany and that is also a reason why the word Prussia rather remains in the background.

Now follow further maps, which give information of the history of Germany at that time. 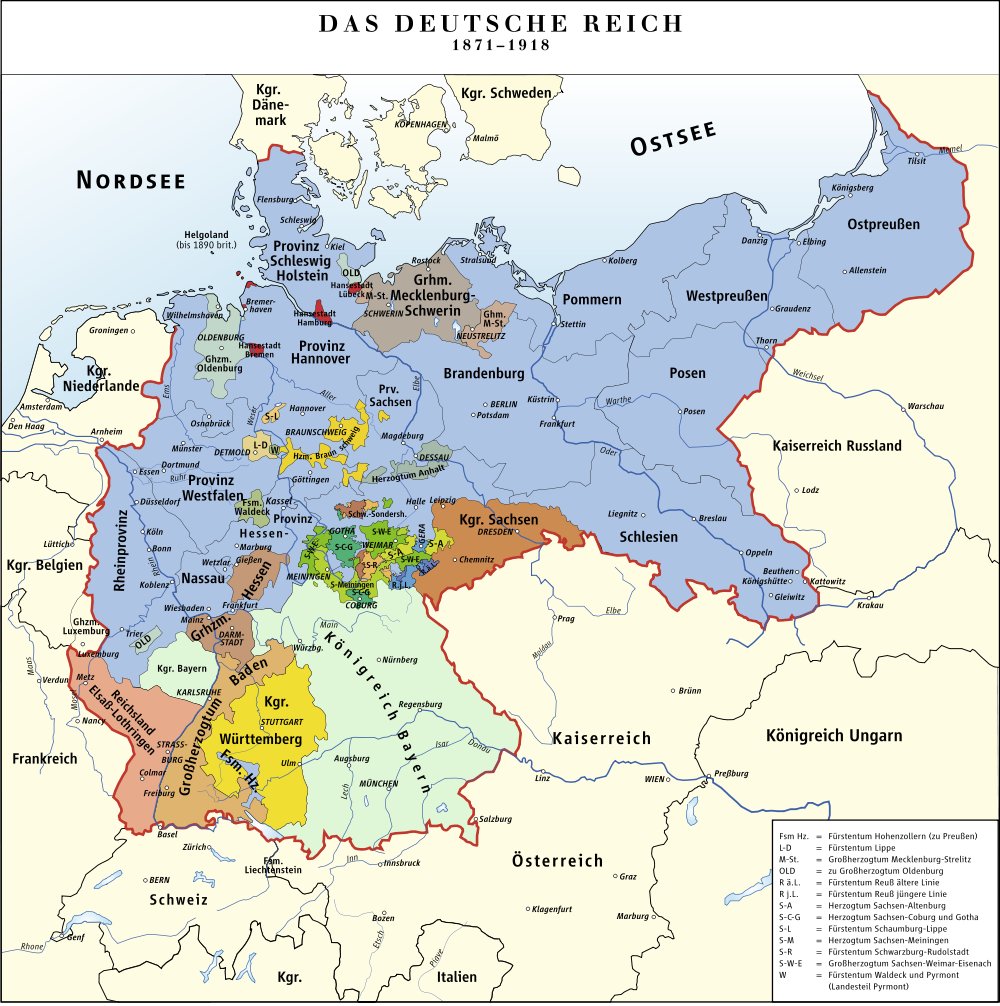 Also on this previous map it is not shown what the blue area is, therefore Prussia. Foreigners are not subject to this influencing, see next map: Prussia. There it is even named twice. Actually even three times. 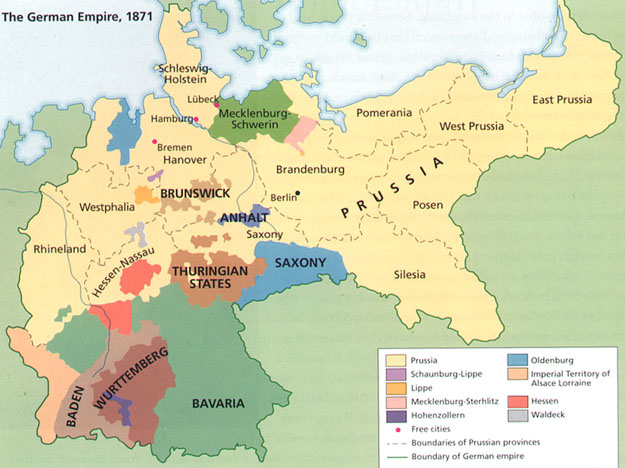 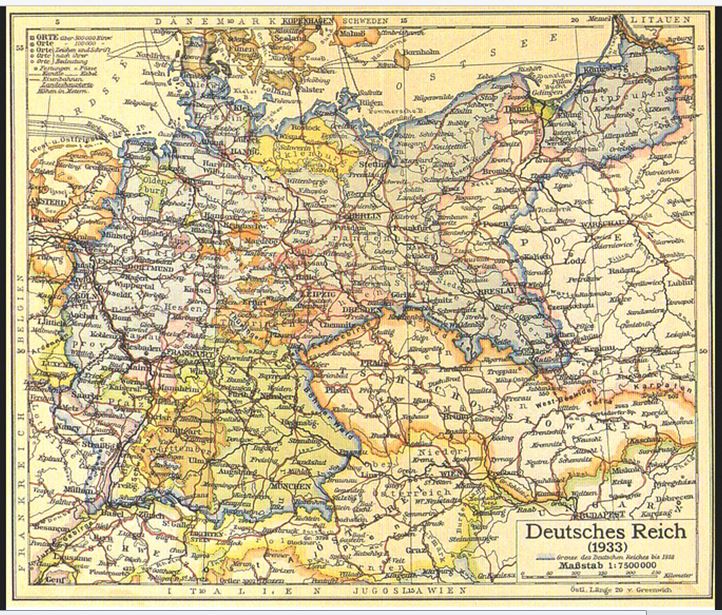 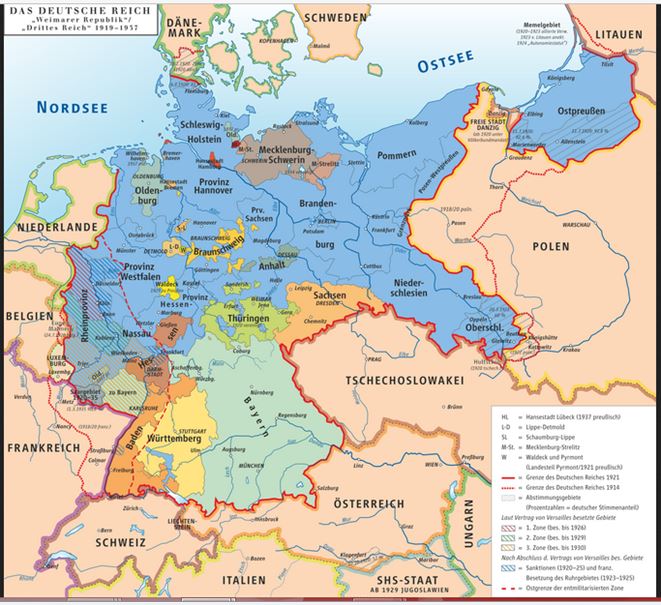 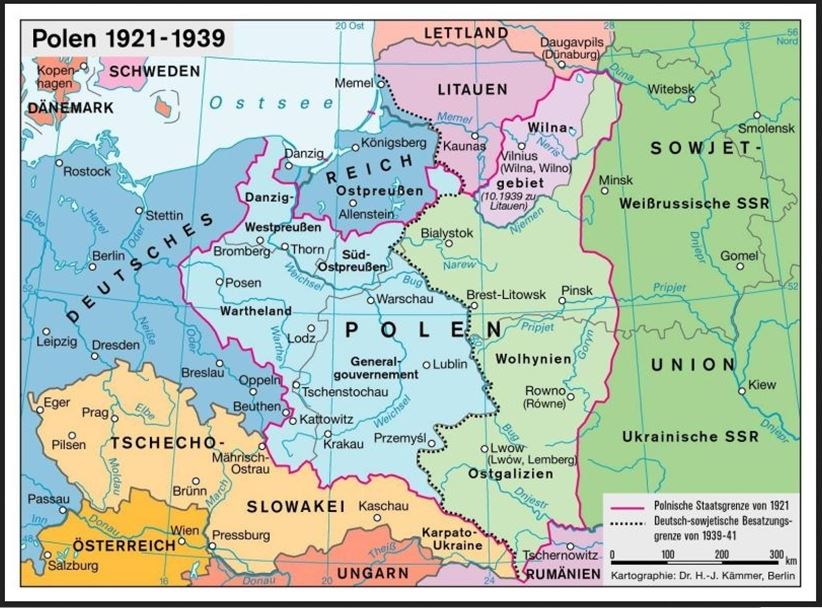 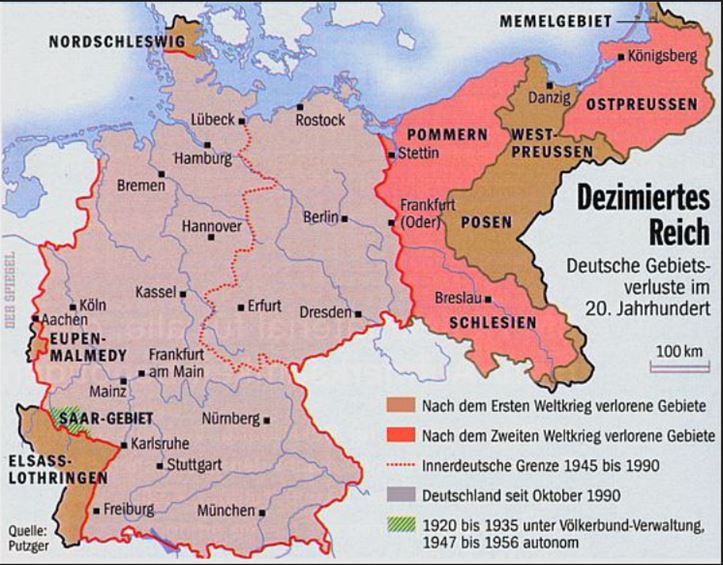 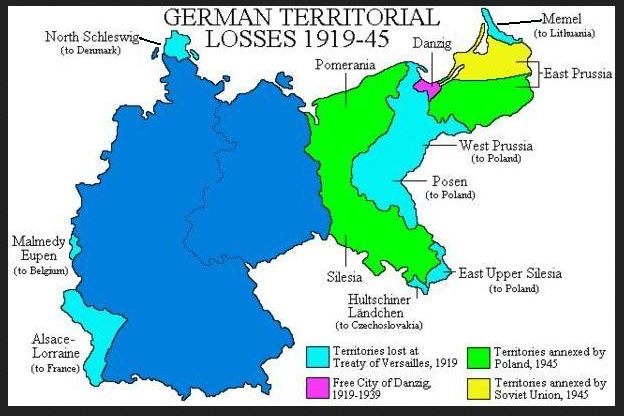 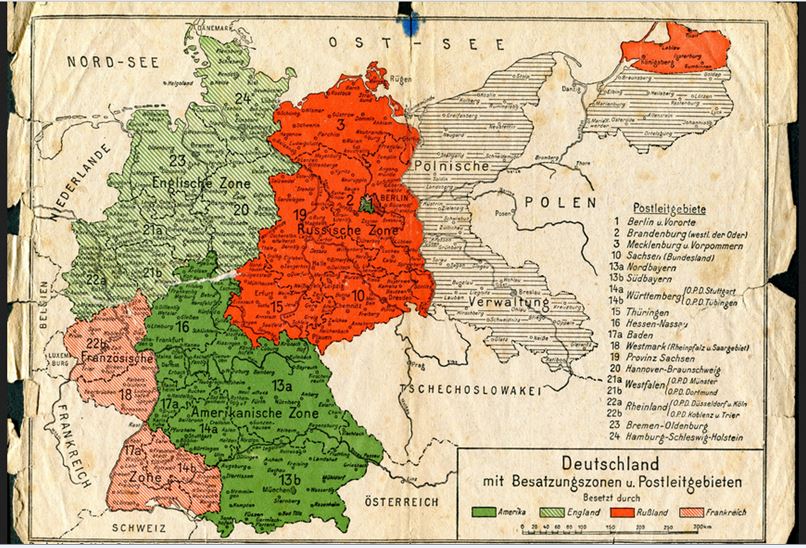 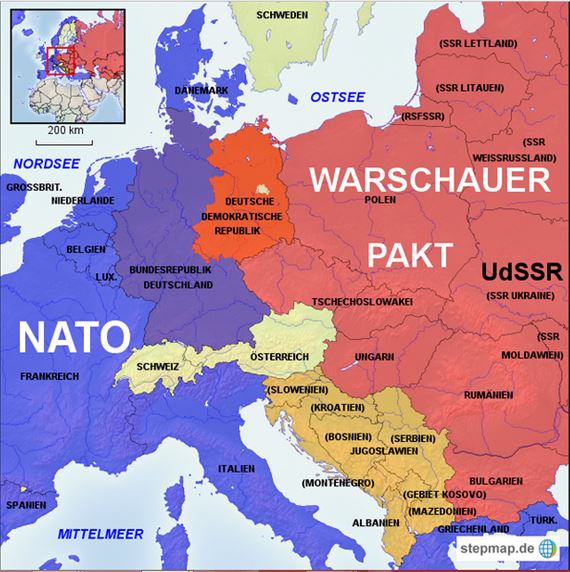 Very impressively this map shows the political situation during east west conflict, during the Cold War, which was the result of the existence of the Soviet Union. This conflict culminated at the inner German border and found its most impressive expression in the situation in Berlin. West Berlin was therefore situated directly inside the area of influence of the Soviet Union, the Warsaw Pact states. 1968 the Warsaw Pact states undertook long lasting manoeuvres and the West Berliner feared that they are the preparation for the attack on West Berlin. On the 21st of August 1968 it then became clear that not Berlin was the target, but Prague.

This event and the Vietnam situation formed the culmination of the power of the Soviet Union and that of the red states and the low of the western world, Nato, under the unfortunate leadership of Kennedy and Johnson.

The main difference between the blue Nato and the red Warsaw Pact was of course the fact, that the people in the blue area were free, and those in the red slaves of the Stalin system. Today the Soviet Union no longer exists, but the influence of the atheists, may it now be the Stalin kind or the Hitler kind, grows nevertheless to a gigantic extent.

This development of the future border situation my mother has more or less foreseen, and for that reason her clear aim was, to proceed to the western side of the Elbe River.

Nato was indeed founded to protect itself from this striving for the world position of supremacy of the Soviets, and is actually with the dissolving of the Soviet Union no longer necessary, but is kept up, because this thought material and these beliefs, the atheistic, has moved there, and now Nato is used to further operate this striving for world supremacy, and now is Russia, interestingly enough, that country, which is fought most against by this system.

The maps on this webpage demonstrate very nicely the evil intent of the leaders of the Democratic Party in the USA, in this case of Roosevelt and Truman. Their atheistic Stalinist convictions, which are the fundamental convictions of the Democrats, caused them to pursue the expansion of the rule of Stalin, of the Soviet Union. When Germany was divided up among the four Allied Powers, they allotted to Stalin not a fourth of the area of Germany, but more than half of its territory.