The Russian Drive to the Oder, January-April 1945 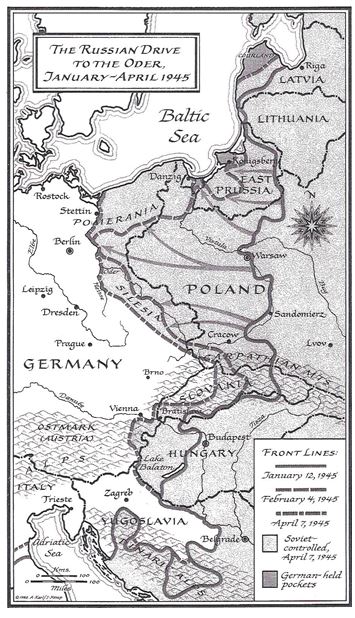 This map shows the Russian drive to the Oder, January-April 1945.

According to this map a large part of East Prussia was conquered between the 12th of January 1945 and the 4th of February 1945.

The area starting from Königsberg towards the west was not yet Soviet-controlled on the 4th of February 1945. But the Soviet troops had advanced to the south west coast of the Frische Haff and for that reason there was only one way to the Reich for the rest of East Prussia, and that was the one across the frozen Frische Haff to the Frische Nehrung and then to the area Danzig and then further to the west.

The two pockets held by Germany, the one is the area east of Danzig and the other around Königsberg, were also still held by Germany on the 7th of April 1945, when the Soviet troops had already taken all areas to the Oder River.

The advancing to the Frische Haff was actually not really necessary, because between Marienburg and the Frische Haff there existed no crossing over the Nogat, the eastern arm of the Vistula, Weichsel, in the Delta of the Weichsel.

We therefore escaped in the last moment over the Nogat Bridge in Marienburg, on the 24th of January 1945, the day when Marienburg was taken, or to be more exact, when Marienburg was no longer accessible. There was much fighting about Marienburg itself, and for that reason to deny the Soviet troops access to areas west of the Weichsel. And also to undertake counter attacks. 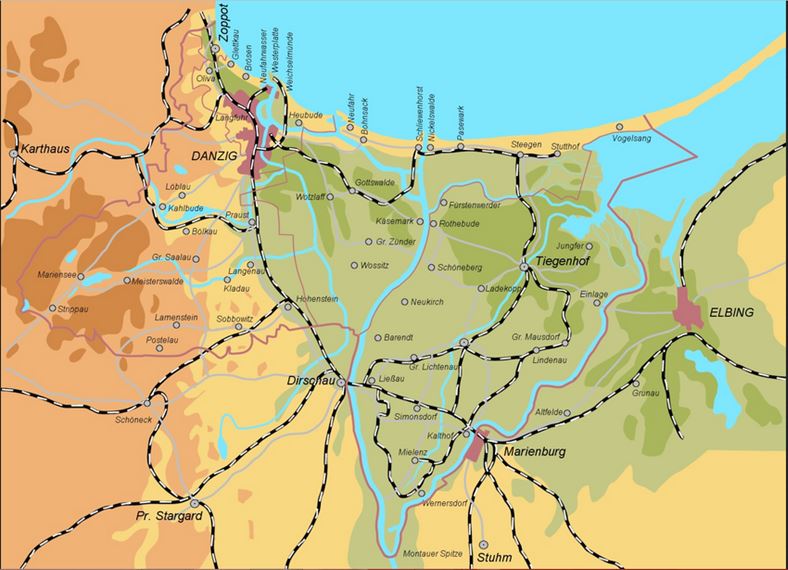 In the north of Marienburg one has only got access to the West, when the Frische Haff is frozen over.

Here a quote from Georg Neumann, who comes from Marienburg: "The bridgehead Marienburg has been vacated on the 09.03.1945 late in the evening. Directly after that the bridges were blown up." Before that he had written in his report of the 24.01.1945: "On the evening of this day the Soviet advance in East Prussia had reached the outer defence ring of Marienbug. Still at night the Soviets shot into the town."

The escape diary has this entry: Wednesday early, 24.01.1945, at 6:30 o’clock driven from Marienburg further over the Nogat Bridge through the town of Marienburg."

Therefore on that day, on which Marienburg dropped out as escape destination, we still have used it as place of escape.

The map of David Eisenhower shows that the area between the Weichsel and the Order, the northern part towards the Baltic, was still free on the 4th of February 1945 and then on 7th of April not anymore. We drove through this area from the 18th of February until the 3rd of March.

More exact information shows that this area fell into the hands of the Soviets between the 1st of March 1945 and the 15th of March 1945. We left it on the 3rd of March 1945; on that day we arrived in Wollin on the island of Wollin.