As first item I bring a map of Heiligenbeil. 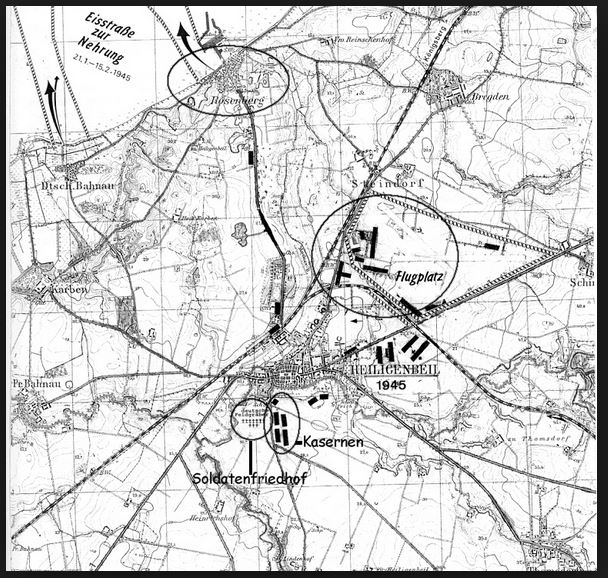 This ice road to the Nehrung will probably have been one of several or even many. The trek from Reichertswalde trekked to the north and reached and crossed the Frische Haff near Braunsberg and reached the Frische Nehrung near Neukrug. And then it went on in direction west, in direction Danzig. Near Schievenhorst the Weichsel was crossed and then near Bohnsack the Tote Weichsel and then Danzig was reached and after that it went on direction west.

The Nogat River is the most eastern arm of the Weichsel Delta and it does not end in the Baltic Sea, but in the Frische Haff and therefore causes the Frische Nehrung belonging to the delta area and only being accessable via bridges and Soviet tanks probably did not dare to use an ice road as a bridge.

The next map shows the Weichsel delta and also further details of the route from the Frische Haff to the area west of the Weichsel River. 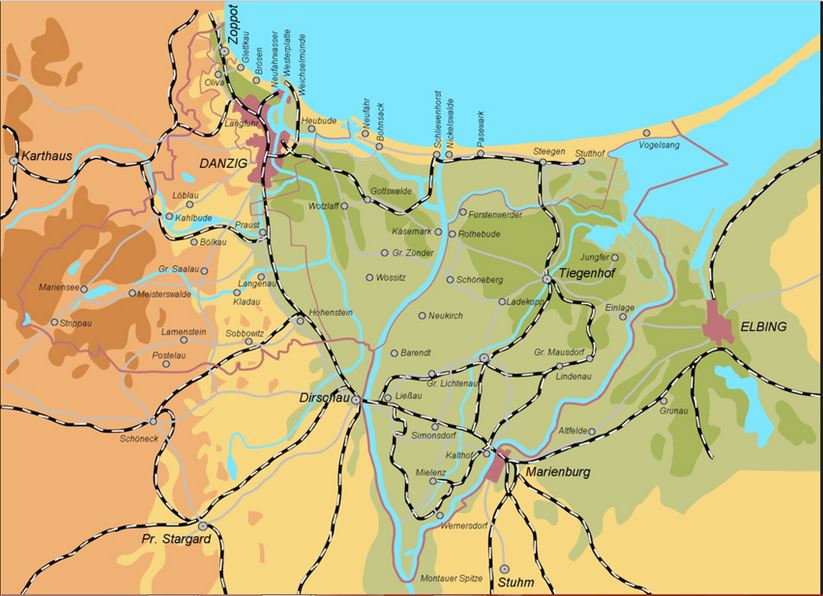 As the next thing a letter from Fritz Schikowsky follows; it describes the route of the trek from Reichertswalde, district Mohrungen, which used an ice road.

Finally I get to answer your questions.

Das Heilsberger Dreieck (The Heilsberg triangle)
After East Prussia was divided off from the Reich through the Versailles Treaty, new defence concepts were sought-after. Before this background as from 1931 a fortification line as protected position for Kˆnigsberg was established. It was an about triangular fortification belt of machine gun bunkers, tank barriers and wire-entanglements around Kˆnigsberg ñ from the Kurisch Haff west of the Deime River in southern direction to Tapiau, then further to west of Bartenstein, north of Heilsberg and west of Braunsberg up to the Frische Haff. Since Heilsberg was about lying before the point of the triangle, this defence establishment received the name "Heilsberger Dreieck". When in the Second World War the attack on Kˆnigsberg became serious, the Heilsberger Dreieck hardly meant an obstacle to the Red Army.

This text I have looked out for you from the internet and copied. More I can also not say to you about it.

The trek started to move on Monday the 22nd of January 1945.

The Oder River was crossed south of Stettin.

Afterwards I will list for you the individual stations, so that you can reconstruct the route of the trek.

Here now the places affected by the trek:

Should you still have further questions, I like to be at your disposal. 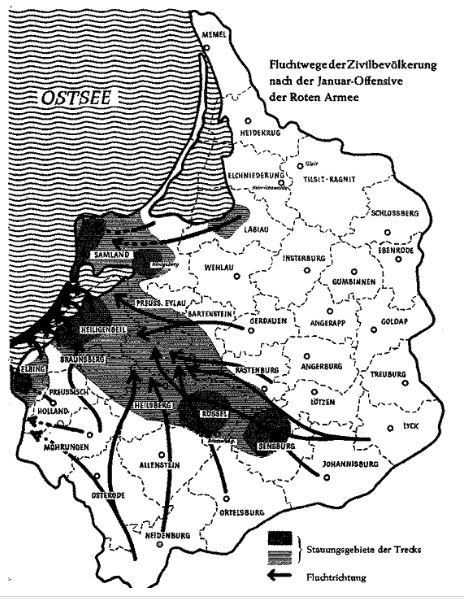 The above map also shows that the ice roads from the main land across the Frische Haff to the Frische Nehrung existed on the whole length of the Haff. The Nehrung was the only way of escape.

At the crossing of the Oder River it was then different. The trek from Reichertswald crossed the Oder before us; two weeks before us, and could do that still near Stettin, south of Stettin, over the Autobahn, while we had to cross the Oder at the lowest end of the Oder delta, over the islands Wollin and Usedom.

Now comes a map which shows Posilge in the very east and then Marienburg and Kalthof. 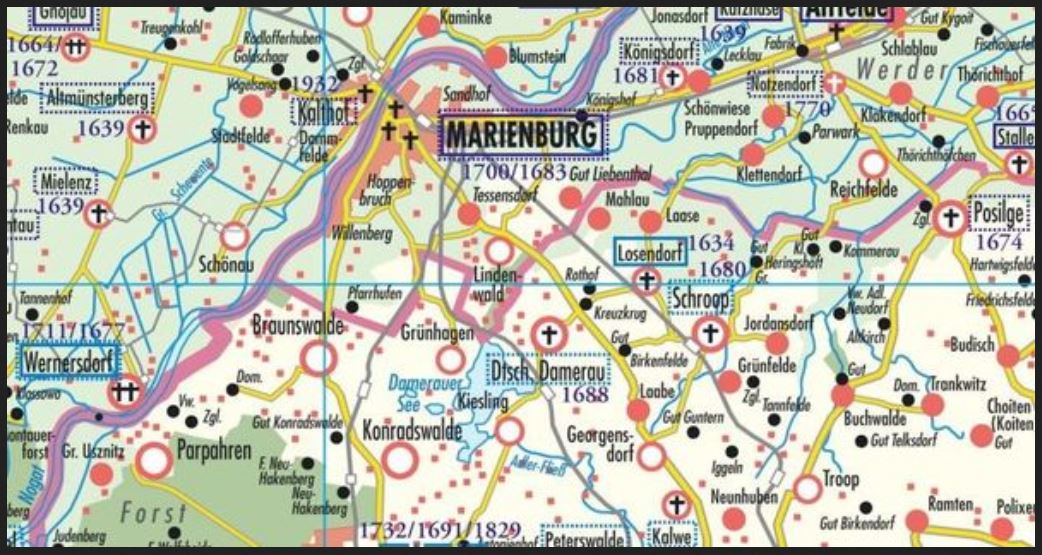 Now follows a map that shows Kalthof and Marienburg, about 1923. 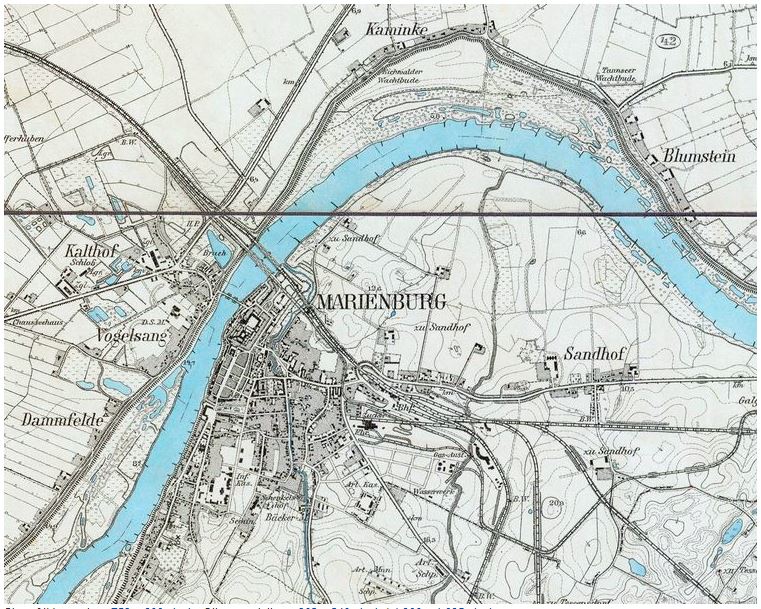 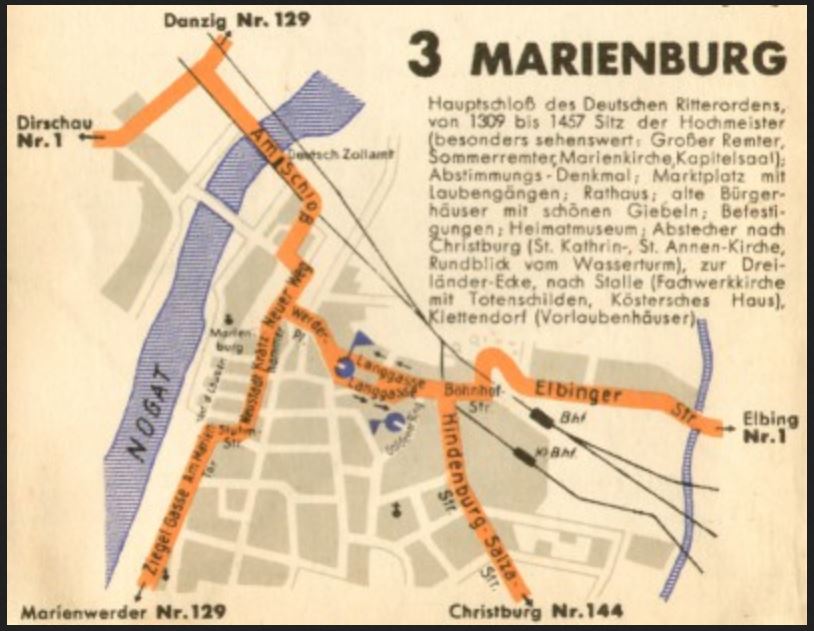 Neumanns lived in the Elbinger Str. and that is part of the road, which comes from Dirschau and goes to Elbing and is shown here twice as Straþe Nr. 1.

And that is certainly also that street which comes from Cologne and goes to Kˆnigsberg, the Reichsstraþe Nr. 1. 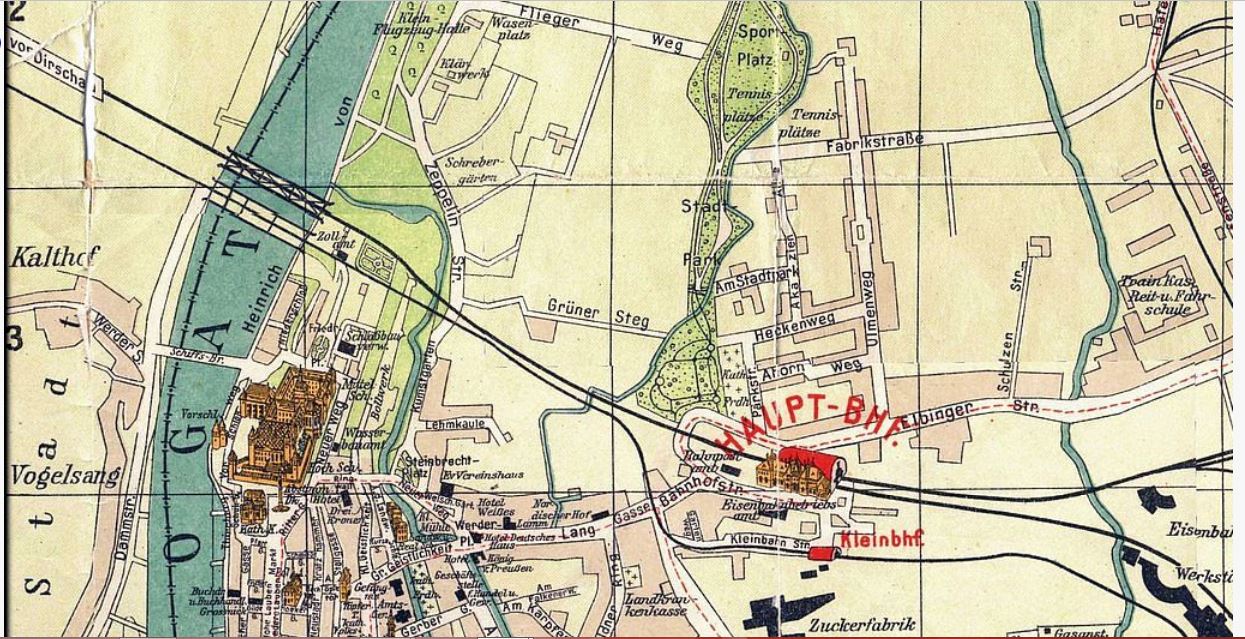 And then Kalthof came on the west side of the Nogat.

On both maps the railway station of Marienburg is shown and immediately to the north the Elbinger Straþe. Neumannís property and house was the Elbingerstraþe 523.

I believe the Elbinger Straþe crossed the railway over the railway and one could stand on the bridge and look down onto the railway.

I remember having stood with Georg Neumann on the bridge and below travelled a locomotive and he has tried to explain to me, how the points work.

The Stadt-Park (town park) to the north of the bridge has probably been that park, to which my aunt, Ida Neumann, took me and had me play on a play ground in a sandpit. I was impressed being together with children, who were unknown to me. On our farm I knew all children. How does one relate to children whom one does not know? Something new.

I believe Neumann's house was on the same side of Elbinger Straþe as the park, therefore on the northern side, only further east, to Elbing. A confirmation for this is Georg Neumann's statement: "My mother prepared for her own escape, by preparing piece-goods with bedding, clothing and silver for railway transport. An acquaintance brought it for her to the dispatch of goods on the opposite side." The railway facilities were south of the street.

The house of Neumanns had town gas in the kitchen and I did not like the smell of it, but the great event was that Aunt Ida put me on the kitchen table and fed me with rolls, topped with butter and honey. There were no rolls with us on the farmstead; that was probably only in town. And with honey it was probably exactly the same. Honey is still today very popular with me ñ and milk. So I live in a land flowing with milk and honey.

The castle Marienburg was shown to me and also the slender round column I have seen, inside of it, which holds the vault above it; and it was explained to me that the attacker tries to destroy the column with a cannon ball to let the whole thing collapse.

Immediately on that day on which I was the last time in Marienburg, on the 24th of January 1945, the siege of Marienburg began.

Around midday the 23.01.1945 Georg Neuman and Aunt Trude Pelz arrived in Marienburg and after about 2 hours left the Elbinger Straþe and walked through the town in direction of the Nogat Bridge, found a lift and travelled over the road bridge to Kalthof and arrived about 18 oíclock in Preuþisch Stargard.

In the evening of Wednesday, the 24th of January 1945 the Soviet advance in East Prussia had reached the outer defence ring of Marienburg. Still in the night the Soviets shot into town.

So I was still one day after Georg Neumann in Marienburg, early in the morning, on that day, on which the town was encircled in the evening.

In the course of this day the Soviet troops penetrated into the outer districts of Marienburg. In the afternoon the first tanks appeared - driving over the railway facilities - at Elbinger Street corner Ulmenweg. There were violent resistance fights everywhere. One can assume that at this time the houses in the Elbinger Street were destroyed because of their exposed outlying location Sandhof, with them the house of my parents. Much later it should hardly have been, because already on the next day the fighting line had shifted to the west to the Stadtpark and the town centre. Merely the house No. 526/527 seems to have remained standing in our neighbourhood as the only one, as a photograph of Waltraud Hilke shows, which was taken there long after the end of the war.

The Ulmenweg is shown on above town plan and there nearby also Neumann's house will probably have been.

Georg Neumann writes: End of February 1945 there was once again news from Marienburg. There a field fortification fight took place since the 27.01, which was to prevent the Soviet army to cross the Nogat and the Weichsel. The bridgehead comprised the area around the castle, the three Nogat bridges and the market place. By this access from the west was possible.

The bridgehead Marienburg has been cleared on the 09.03.1945 late in the evening. Immediately after that the bridges were blown up.

The blowing-up of the bridges meant of course for us that the way of the attacker over the Weichsel, more exactly said, over the Nogat, was no longer given and he could therefore not pursue us directly, but that he probable had done already earlier, more upstream.

The map of Eisenhower, The Russian Drive to the Oder, January-April 1945 shows that on the 4th of April 1945 the Soviets had already reached the Oder east of Berlin and that only the space between a line from south of East Prussia to south of Stettin and the coast had not yet been conquered, that we already then stood shortly before the encirclement.

The maps The conquest of Germany 1945 show that the Weichsel delta was still not red on the 1st of May 1945, and that the just mentioned coastal area between Danzig and Stettin was not yet red on the 1st of March 1945, only on the 15th of March. Our escape was therefore also again in the last moment, since we reached the Oder on the 3rd of March.

Now follows a map which shows Dirschau and beneath it Baldau. 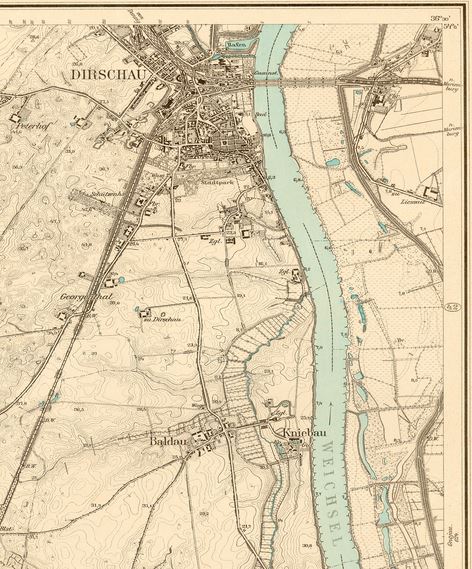 A picture of the Weichsel Bridge at Dirschau follows.

And now follows a map which shows the area around Wiesenthal. 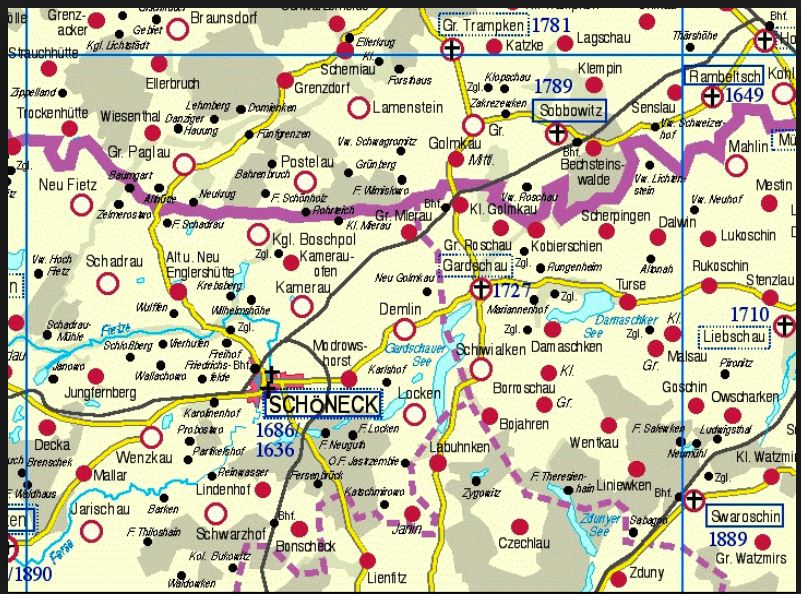 Wiesenthal is up on the left. To the left is Trockenh¸tte; to the right is Lehmberg and further down is Schˆneck, the railway station. Trockenh¸tte is the place through which the trek travelled before Berent was reached.

And now escape stations from Kranthau to Berent follow. 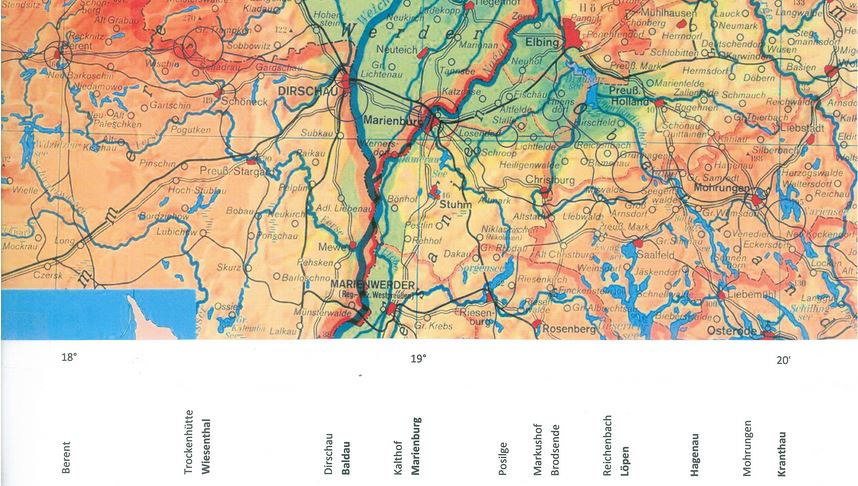