The first thing I bring is a map where the escape stations from Marienburg to Kolberg are entered. 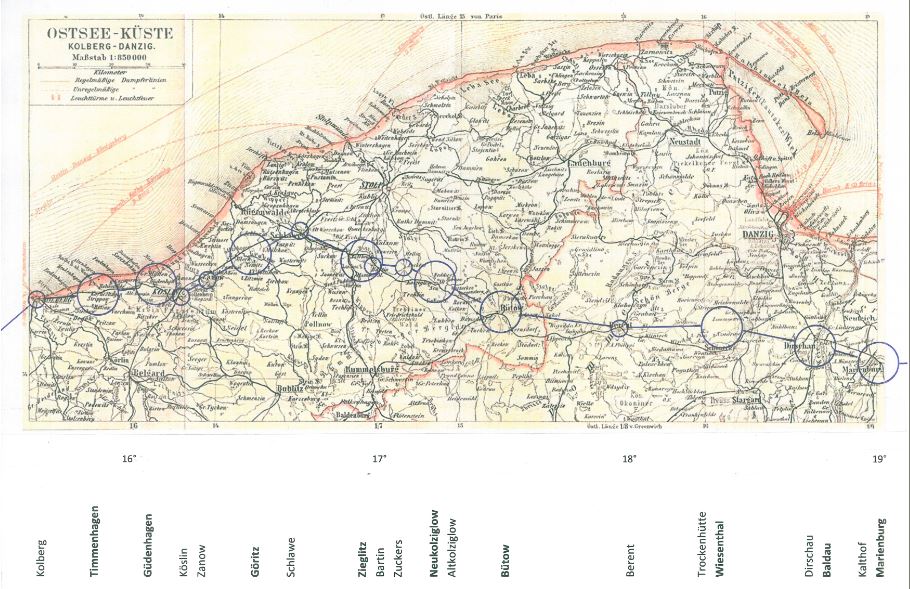 It is the above map, only without the entries of the escape stations, but of better quality.

Only the vertical gridlines of the Paris system are given, of the Greenwich system only the data are entered, no gridlines.

On this map one can see the Westernplatte north of Danzig, where the Second World War began.

As the next thing I bring a map of the province Pomerania, from 1905.

On our escape we came through 6 provinces of the land Prussia and also still through two other lands of the German Empire.

Perhaps even through a fourth land, Braunschweig. 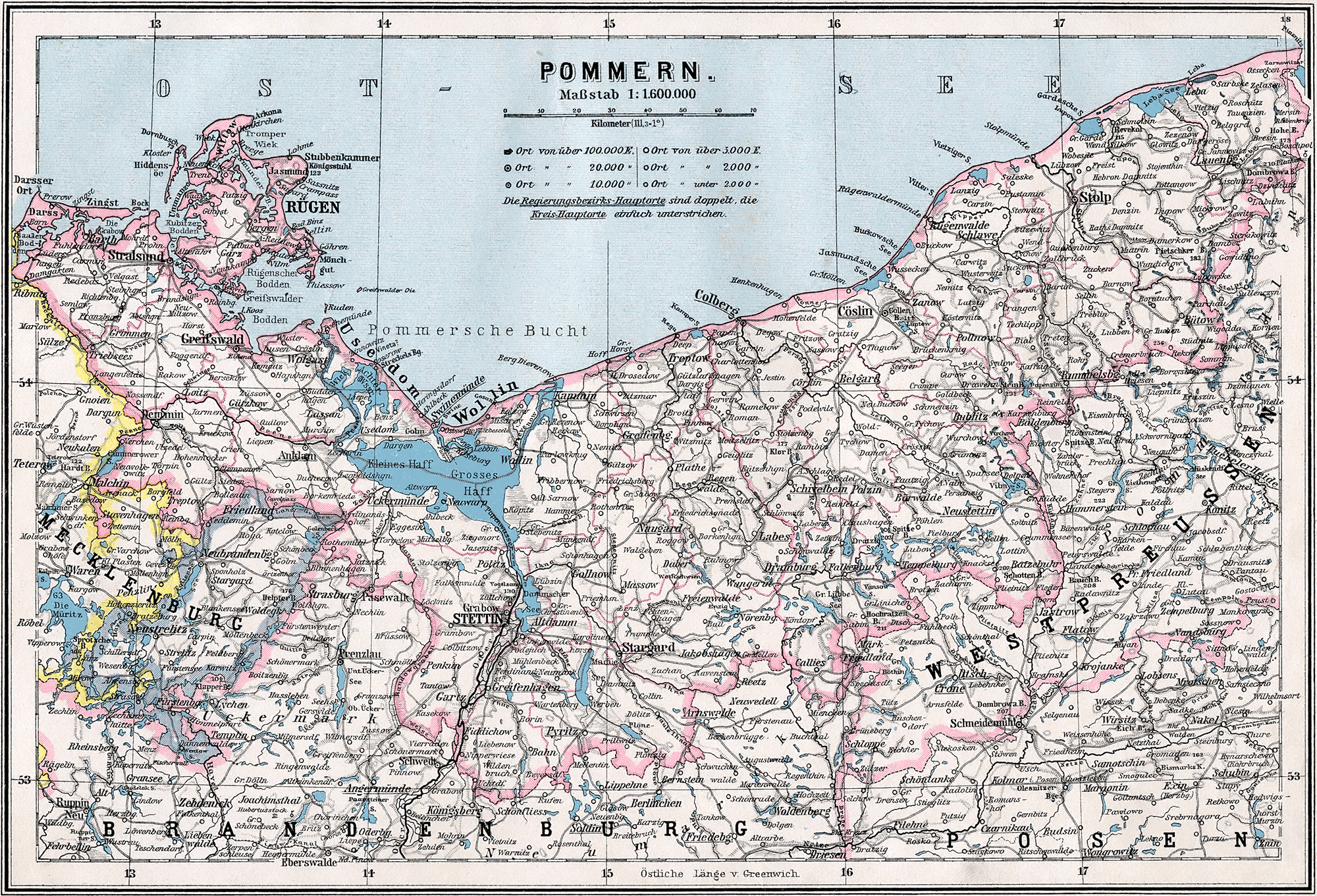 The following map shows the escape stations from Zanow to Wollin. 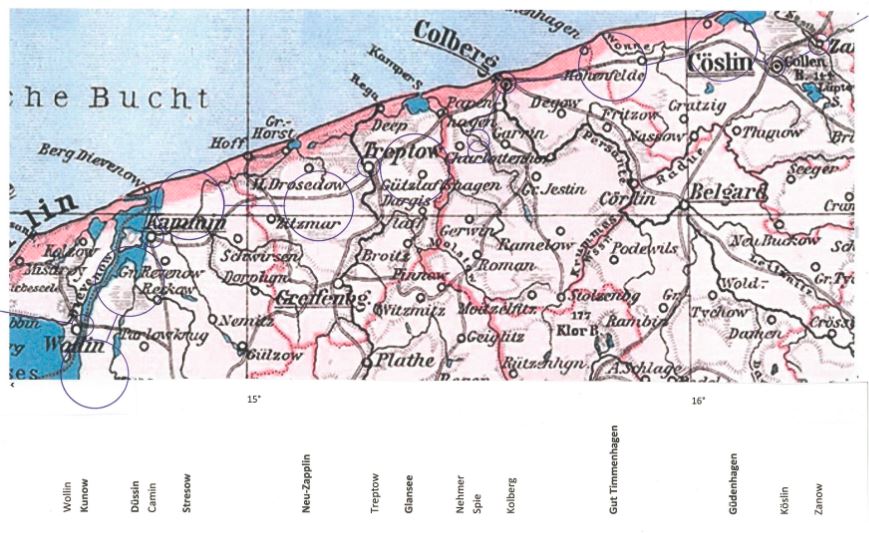 The following map shows the escape stations from Timmenhagen to Glansee. 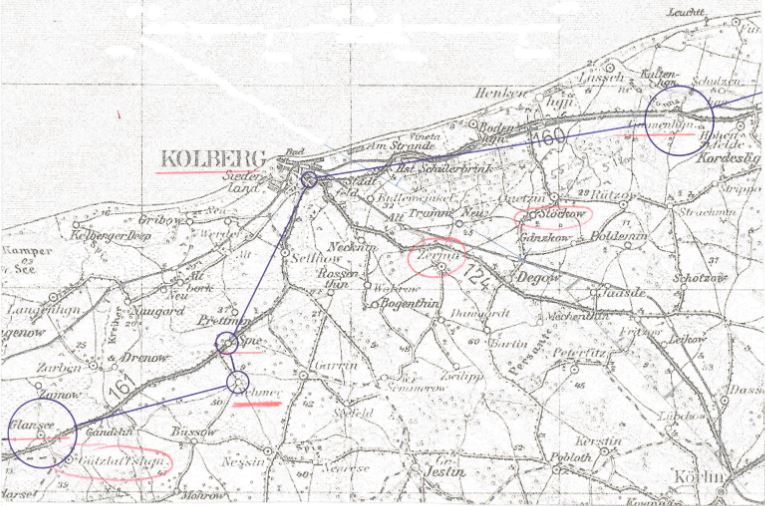 The following map shows the escape stations from Kolberg to Zapplin.

The place name Gützlaffshagen is encircled in red. In that place the trek from Reichertswalde stayed overnight form the 16.02.1945 to the 17.02.1945.

The trek from Kranthau stayed overnight in Glansee, which lies directly next to Gützlaffshagen, on the other side of the road, in the two nights from the 25.02.1945 to the 27.02.1945, therefore 10 days later.

Those from Reichertswalde travelled from Neustrelitz passing the Müritz to the north, through Waren, and we south of the Müritz, through Röbel. 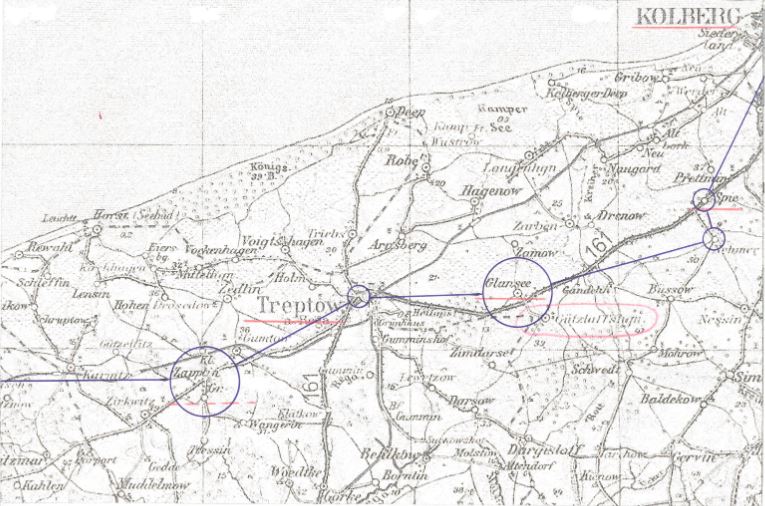 The following map shows Stresow and Cammin and Düssin. 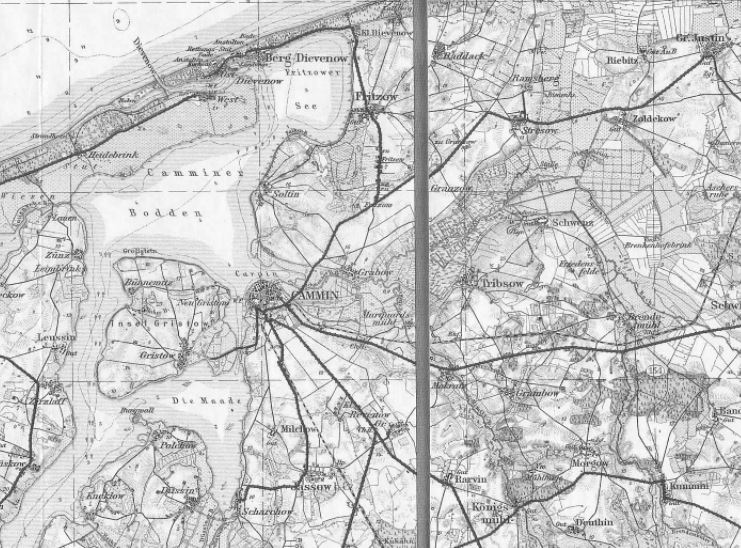 Now comes a map of the island Wollin. 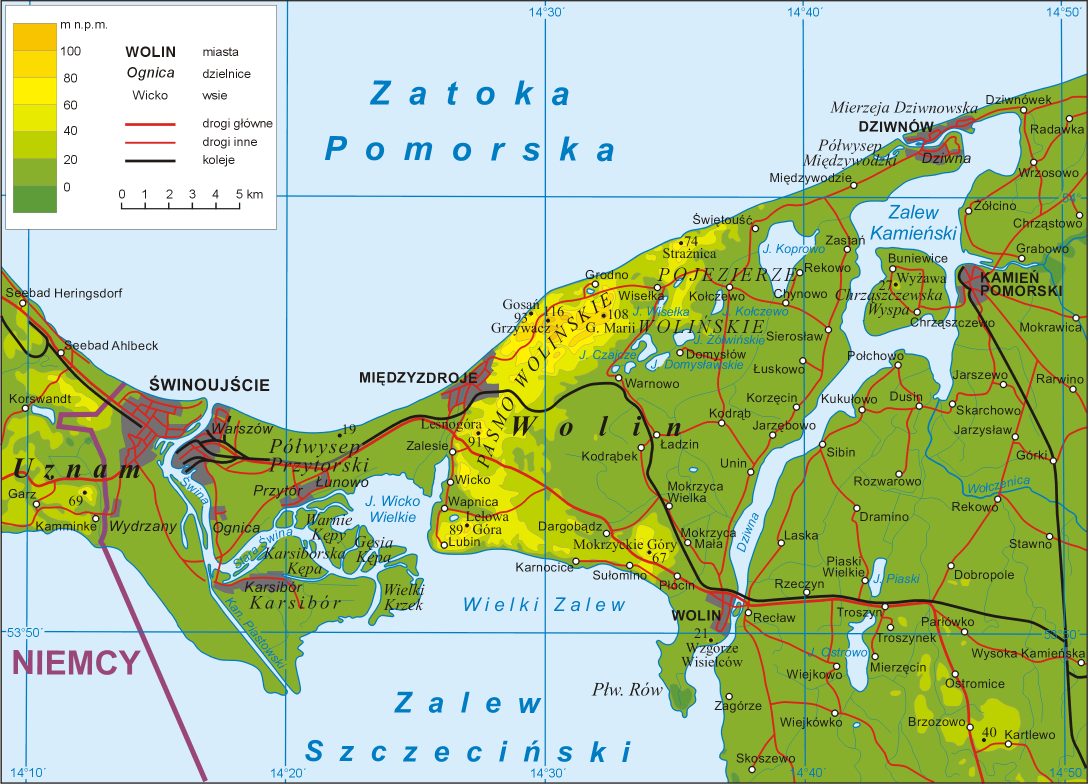 And now a map of the islands Wollin and Usedom and with the entries of the escape stations. 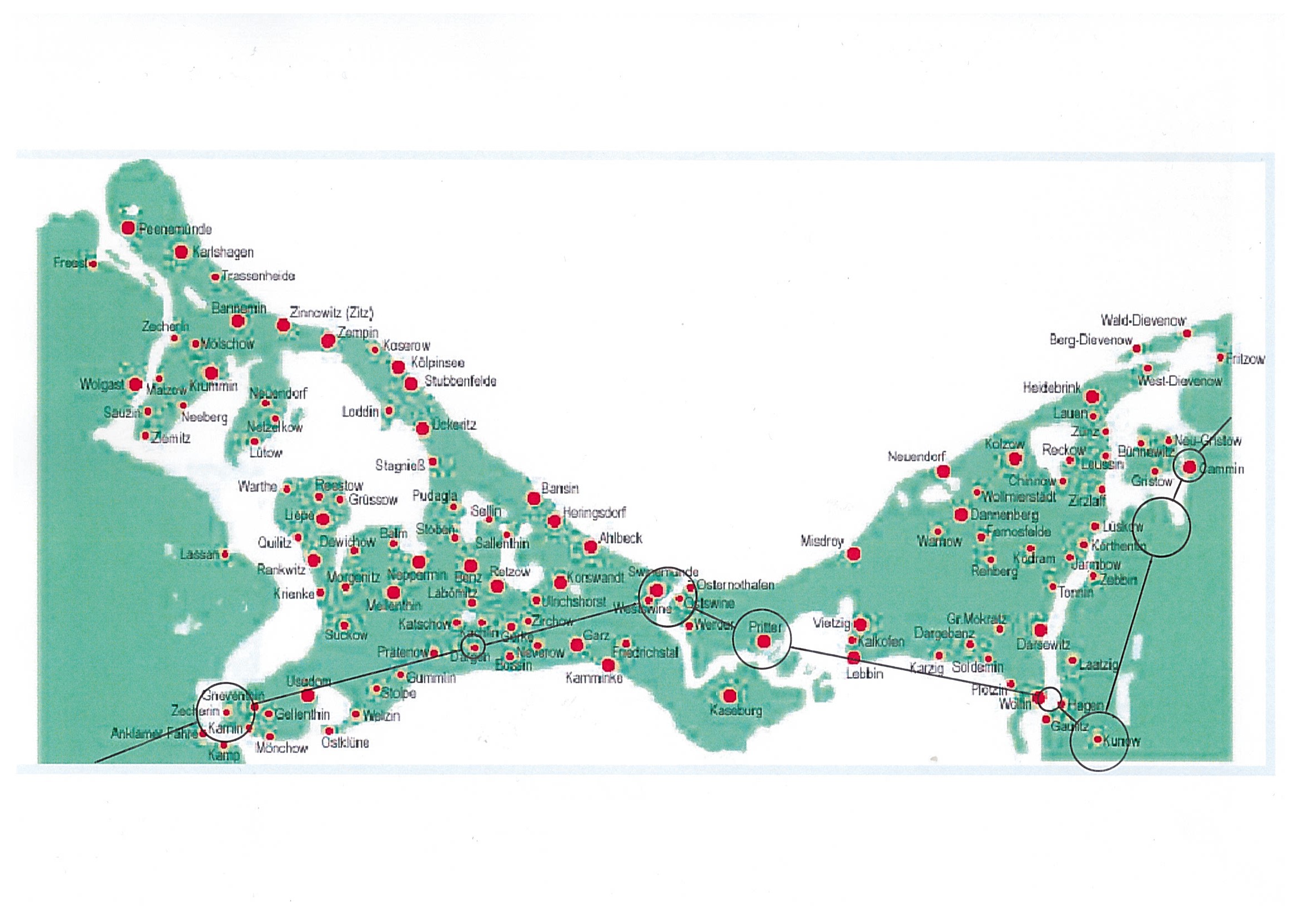 The next map shows the bridges of Usedom and Wollin. 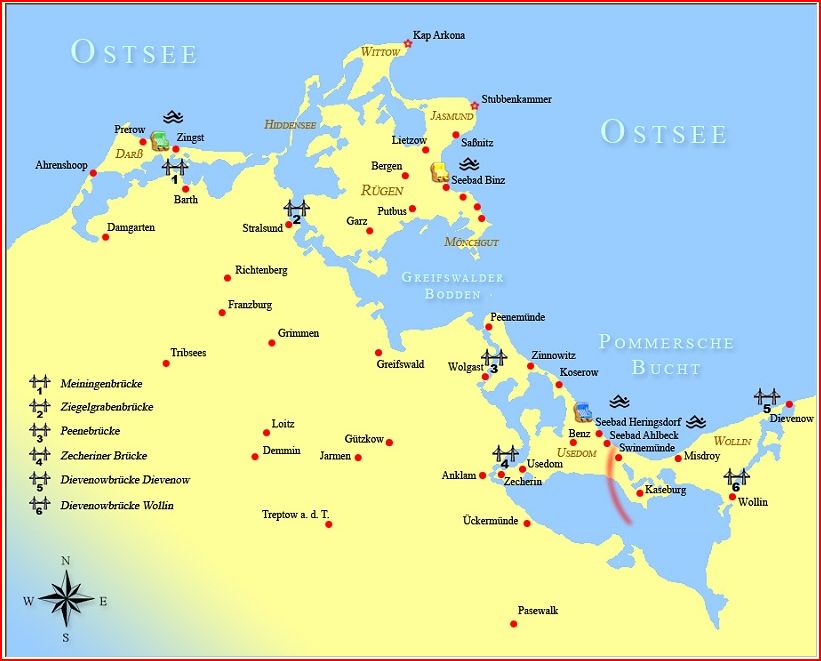 So we crossed the Oder River at three places.

On the 3rd of March we set off east of the Oder in the morning from Kunow, to Hagen, and from Hagen over the "Dievenowbrücke Wollin", about 10 o’clock, therefore over the Dievenow, to the town of Wollin, on the island of Wollin, and then further to Pritter.

The crossing on the ferry was then therefore on Monday, the 5th of March 1945.

From Swinemünde, where we stayed overnight on the waggon, we carried on to Dargen on Usedom. From there through the town Usedom to Zecherin, close before the big bridge.

On Tuesday the 6.03.1945 we set off at 9 o’clock from Zechering on Usedom, immediately over the big Oder Bridge – that is what it says in escape diary – to the mainland and then further to Anklam and then Postlow and there overnight.

The name of this second bridge seems to be "Zecheriner Brücke". The name of the first bridge is "Dievenowbrücke Wollin".

And what crossed the second bridge seems to be the Peene, or the "Peene-Strom."

The Peene flows into the Oder River, or the into the Peene-Strom, shortly stream upwards from the Zecheriner Bridge.

And at the end of the Peene, or of the Peene-Strom, is Peenemünde, which became known through the rockets.

I have once been in the harbour of Malchin, and therefore the Peene is navigable at least to Malchin.